My Chicago Marathon adventure was eventful from the start.  It’s the one that almost didn’t happen after making an almost fatal flight choice.  But don’t worry, there’s a happy ending!

I booked a flight to Chicago that connected in Barcelona, rather than the direct flight, for the single reason that it arrived 2 hours earlier.  I though that time would be precious.  I was wrong.

I was already worried when a time change left us just 45 minutes to make the connection, but after a late boarding which made it clear we wouldn’t take off on time I knew I shouldn’t have got on the plane.  My fears became a reality when the captain announced we’d be sat on the runway for another 25 minutes.  With no other flights to Chicago from Barcelona that day, the options were to get off the plane that had already been sealed…or miss the marathon and ruin my life.

No wasn’t really an option so after absolutely insisting we get off, they let us depart, got our luggage off the plane and transferred us to the later direct flight.  We even took 6 other passengers with us, I have no idea how they thought they were going to make the connection..  So, we were still at Gatwick and had got up at 5:30am for nothing but I was going to make it to Chicago.  I needed a large glass of wine.

With no other travel dramas (although separated from Steve, I lucked out with an exit row seat with loads of leg room), the rest of the journey was smooth and we arrived at the hotel late on the Friday night.  Despite being awake for 24 hours we awoke at 6am (body clocks are funny things) which gave us time to catch up on Kipchoge’s epic run before heading to the Expo. 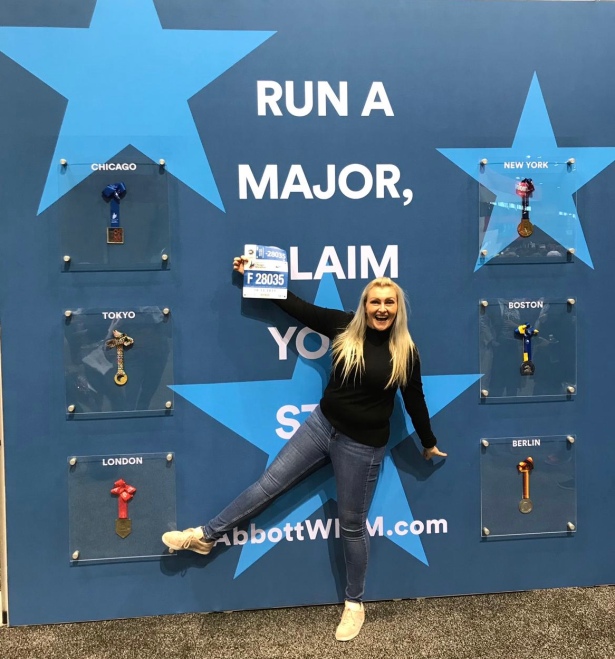 It was cold in Chicago, colder than I had anticipated, but it was dry and sunny.  The Expo was only a short walk from the hotel and I was getting excited, it was my first marathon outside of Europe!

The Expo was large but easy to navigate and it was quick and easy to pick up my race bib. I made more purchases than necessary, met a 2 x Olympian who had a company called Reckless Running with some great running gear, and had a look round everywhere in about 2 hours.  It’s big…there’s lots to buy…save up!  By this time the queues to get in were quite long (everyone is security searched) so was grateful to have arrived early.

We had planned to take a river cruise in the afternoon but after the Expo and heading into town for some lunch we were both exhausted so picked up some supplies and got back to the hotel at about 5pm to chill out and get an early night.  The race starts EARLY, the first wave is off at 7:30am and my wave started at 8 with a recommended arrival time of 6am!  An early night was a necessity but the jet lag made that very easy.

Two hours hanging around at the start seemed like a long time but I had also heard the start area was chaotic so I was a little wary of being blasé.  To save some stress and buy a little extra sleep, I made a late decision to not use the bag drop.  I had an old jumper to drop at the start anyway and I planned to start in my arm warmers, gloves and buff as I knew it would be cold.  Steve was going to be at mile 5 so I could give him what I didn’t want.

No bag drop meant a nice long lie in until 4:45am…although I awoke easily having gone to sleep before 9. The hotel had made me a ‘sprinters special’ marathon breakfast (maybe they thought everyone ran like Kipchoge?) so I had my bagel, banana and yogurt topped with blueberries & granola, it was actually quite perfect!  The hotel was also running a shuttle service to the start in Grant Park which was helpful (and warm!). 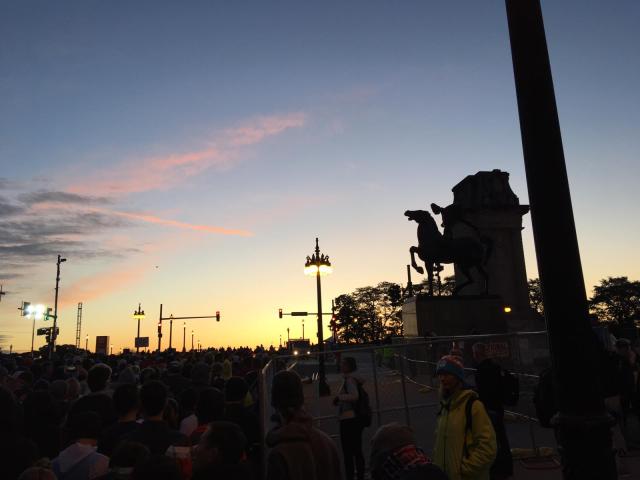 I think I arrived about 6:45am which left an hour before the wave closed.  I started to understand why they advised people to get there early because everyone was searched (both bags and body) before being allowed into the park so there was a queue.  As I didn’t have a bag to drop off I wasn’t worried, all I had to do was get in and use the toilet, sorry, port-a-potty.

I actually think the start area was well organised, after Boston it’s understandable why they want to search people and, with 45,000 runners it will take some time which is why they suggest arriving 2 hours early.  There are several different start gates to break people up and the queue was moving.  After getting into the park I made it to the toilet (ahem, port-a-potty) and my start zone with time to spare.  Obviously there were queues for the toilets but I’ve certainly had to wait a lot longer, the wait in Berlin was at least twice as long. 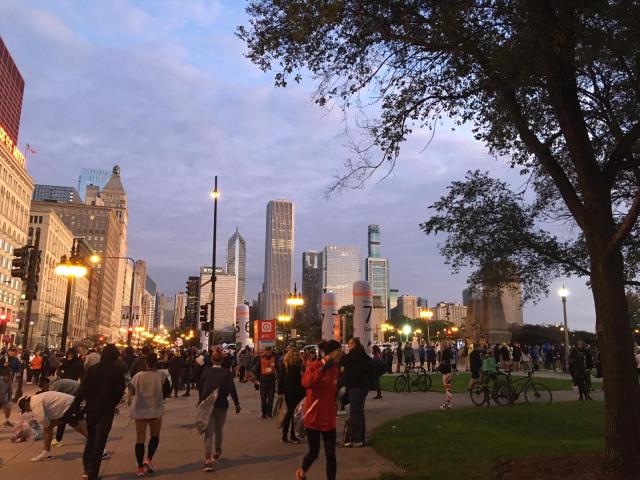 The National Anthem was sung, the race started promptly at 7:30 and it didn’t seem long until our 8am wave was crossing the start line.  I was only bloody running the Chicago Marathon!!  It was cold but could have been worse, I was grateful for the arm warmers and gloves.

I didn’t have a time in mind, I simply wanted to get to the finish and have fun and I think this attitude added to my enjoyment of the day.  It’s easy to get swept up by the people around you in races but I stuck to my plan of 9 minutes running, 1 minute walking right from the start (don’t worry, I stayed out of the way!) and I felt good until at least 16 miles.

The course takes you through 29 neighbourhoods starting from Grant Park.  It wasn’t long before we went through the first tunnel and it was clear that, along with the skyscrapers, the GPS was going to be no help whatsoever.  I saw Steve at mile 5 (I made him wear my Chaser hat so I could spot him from afar!) but I was only just ready to give up my arm warmers and gloves.  I saw a girl from Fulham running club who took a mid-race selfie (I wish I knew who she was!) and stopped at the port-a-potty in Lincoln Park where there there wasn’t a queue.

After heading uptown and past the zoo until about mile 8, we started to run south again where I saw Steve just before half way.  I took a cup of jelly beans from a nice lady (not just any ol jelly beans, Jelly Belly beans) which went down a treat. The route takes you west out to the United Centre (home of the Chicago Bulls) where there were people dressed up, and then down to china town where I saw Steve for the last time just after mile 21 and debated whether I could run another 5 miles.  The girl next to him told me to keep going as there was beer just up the road, she was right and at mile 23 I knocked back a beer from the friendly Goose Island people!  Only a parkrun to go…

There was in fact a lot of beer being offered by various people along the route from about the halfway point onwards, they love a street party!  At some point I gladly took a cup of full fat Coke from a spectator, it was the best thing ever!

After mile 23 we headed north back to Grant Park, somewhere, I think it was just before mile 26, there was an actual hill.  I had been warned but it was still an unpleasant sight so close to the finish.  Luckily it was a decline from there all the way to the finish line.  And there it was, world marathon major number 3 completed!

I absolutely loved the Chicago Marathon and genuinely cannot fault it.  The route gives you a fantastic tour of the city, it’s very well organised and there are lots of aid stations.  It’s also very well supported with 1.7 million spectators and a lot of supportive signs (there were a fair few that said ‘1:59:40 is the goal!’ and ‘Kipchoge is already in the pub’).

The marathon is flat and on wide roads so a good time is possible as long as you can pace it without GPS.  There are more pace groups than I’ve ever seen at a marathon so take advantage of them if you want a particular time.

The finish area is well managed, you get water and your medal quickly and then they’re wrapping in in a foil blanket making sure you’re ok. It starts early but I actually quite like that, it gives you more time for post race celebrations!

If I did it again travelling west (like I will when I do New York & Boston…) I would arrive on the Thursday.  This would have given me more time to rest after travelling but still let the jet lag work in my favour.

We stayed at the Chicago South Loop Hotel.  This was more than perfect for us, a short walk to the Expo, a shuttle service to the start for $5, easy to get home to and there’s a bus stop right outside that takes you pretty much anywhere you’d want to go.  It was slightly cheaper than some of the hotels directly in the centre (although Chicago hotels in general are expensive over marathon weekend), super comfortable with spacious rooms and still in the ‘safe’ area.  Wherever you stay, book early as the City gets full.

The day before the marathon we had lunch at Eataly which is like an Italian food market with small restaurants.  It was recommended before we went and didn’t disappoint. I had a bowl of pasta and Steve and I shared a pizza (which I was glad about because the pasta wasn’t huge, at least not pre-marathon huge).  Later in the evening I had a bagel at the hotel so I could get an early night.

Post marathon you want to check out the famous Chicago deep dish pizza (we went to Giordano’s), it’s a cheese lovers dream!

Chicago: My Kind of Town

What else to do in Chicago: