When I was invited to take part in the Zombie Evacuation Race by Currys the day after Halloween I was dead excited and immediately said yes.  This was promptly followed by a warning that I may be electrocuted….erm, OK, what’s a little electrocution right?!

“Run for your life through a 5km course dodging the UNDEAD and navigating a multitude of challenging obstacles designed specifically to slow down your escape from relentless ZOMBIE horde who are hungry for fresh brains! Survive or be become one of them!!

Only the fittest will survive…”

I arrived at Allianz Park in North London at 8am and headed to the registration tent, or the Evacuee Check-In, where I signed the bit that precludes you from suing anyone if you do in fact get infected by zombies, or electrocuted, or lose a limb, all the usual stuff.

I was then given a ‘GPS tracking device’ which was a waist belt with 3 lifelines attached with velcro – loose all 3 lifelines and you’re officially infected!

I met up with my fellow bloggers (and fellow Clapham Chaser Fiona who was also ready to take on a few zombies) and the nice lady from Joe Blogs gave us all a different piece of the latest wearable tech to test out during the run courtesy of Currys.  I was given a Withings Pulse O2, a nifty little device that tracks steps, running, elevation, heart rate and sleep, I couldn’t wait to give it a go!  There will be more on the Pulse O2 to follow as I’m still giving it a full test run but so far so good!

The cold rainy start to the day had made way to sunshine and the atmosphere was brilliant.  As we made our way to the start line on the track (the same track that was used as the warm up tack for the 2012 Olympics no less) ominous music was blasting over the tannoy and we could see the gruesome zombies shuffling and limping on the rugby pitch. 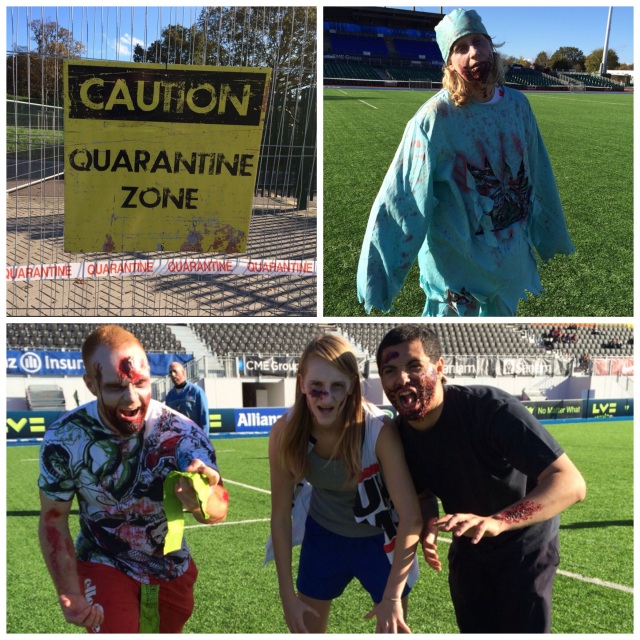 The race organisers did a great job getting everyone in the mood – a Sargent from Majesty’s RAZORS (Royal Army Zombie Outbreak Response Squadron, obvs) explained that as of 0700 hours the UK Mainland had been placed under quarantine due to a zombie outbreak.  We were warned that we should not engage in any physical contact with the zombies as the infection was highly contagious and we should proceed directly to the evacuation zone – uh oh! 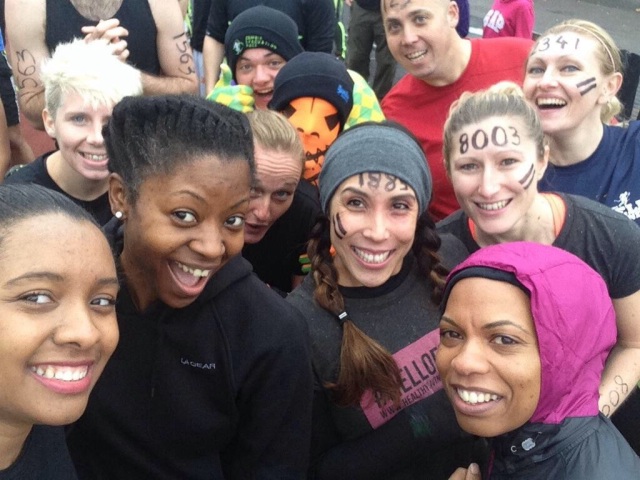 As the zombies hovered dangerously close, eager to get their grubby infected paws on our fresh skin, the Sargent started to lead us round the track and into the woods on our mission.  I really wasn’t sure what to expect but I had the same nervous energy I get when I know I’m going to be doing some sprinting, I’ve just never sprinted away from zombies before!

Together with the music building a sense of fear and dread, thick smoke was pumping out on the ground creating a mist that was difficult to see through, were the zombies going to attack us already?!  We started with a jog, sticking together seemed the safest thing to do, but as the course opened up and I decided to put my legs to work and go for it.

All over a sudden we were rounding a corner and the music from some kind of horror film with a baby (Carrie?!) was playing and THERE WERE ZOMBIES!!! It really was quite terrifying to be faced with a group of mentalists swaying back and forth looking like death and trying to attack me…so I ran faster and screamed!

The course continued through the woods with a number of  zombies zones to navigate, some covered in sheets with blood smeared over them, some zombies hidden under things waiting to pounce, some just milling around looking completely insane, there was even a zombie bridge and groom!

Various obstacles, as well as zombies, also plagued the way including barbed wire, ditches, dogs (although I’m not sure they were part of the course, they were much more friendly than zombie dogs…), more smoke, minefields, steps, even the brambles in the thick woodlands were attacking me!

And as for this guy…was I scared to run up the stairs towards him to get past…?  Maybe a little, wouldn’t you be?! 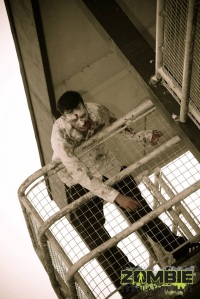 My bull-in-a-china-shop approach didn’t really work and I was left without any lifelines in less than 10 minutes, a more cautious approach may have been more effective in hindsight.  As the course came back towards headquarters we were taken into a large, pitch black warehouse…a pitch black warehouse full of zombies, that was definitely a scary part!

Action shot. This may have been the point of infection…

Out of the warehouse we went over a bouncy castle and then were faced with the final challenge. The rugby field.  This reminded me of a scene from The Faculty, stood at one end we had to run to the other but the the field was full of insane looking zombies that wanted to catch us, it was quite unnerving.  Head down and RUN!!!!

Of course I was already infected but it was still scary.  At the end there were 2 tunnels, one for Survivors and one for the Infected..I crawled through the Infected one and I was done!

The race crew then whisked me away and turned me into a zombie so I could join in the chasing on the rugby field to scare a few unwitting suspects – it was fun, fun, fun!

The Zombie Evacuation race was brilliant, a brilliant idea, brilliant execution and a LOT of fun.  There are a few logistics that need to be ironed out (some of the course was very unclear and I didn’t actually get a finish time despite the timing chip) and it’s very expensive for a 5K, but I can promise you will have a great time.

I’d like to thank both Currys and Joe Blogs for sponsoring me for this event.

As for me, well, I feel fine now. The infection’s gone.  Totally recovered in fact.

I mean, I’ve got a little headache I can’t shift…and a twitch in my eye…but who doesn’t??  I’m also looking a little pale but that’s nothing a little fake tan can’t fix, right??

Then there’s the bleeding and….Oh