When you run into an Olympic stadium with thousands of people cheering as you pound the very same track that saw Mo Farah, Jessica Ennis & Usain Bolt achieve Olympic Gold Medals you get goosebumps.  My Sunday morning was incredible.

The alarm went off at 6am and all I really wanted to do was turn over & ignore it, but it was race day…again.  Not just any race day however, but the National Lottery Anniversary Run which would take me on a 5 mile journey around the Olympic Park and finish with the last 300m on the track in the stadium.  The race sold out in hours and I was only lucky enough to get a place because my Twitter buddies were frantically talking about it.  Thank you!

Each participant received 2 spectator passes for the stadium so Mum & Dad had come up to London for the weekend to watch.  We arrived early to soak up the atmosphere and get a good seat.

As I walked to my start pen I spotted Paula getting mobbed by fans wanting photos.  I was excited now!  I darted into the pen and found a spot in the middle where it was warmer, it was actually quite chilly early on in the day. They introduced Mel C (she does triathlons now apparently!), Victoria Pendleton and Paula, who were all running, and then Sir Chris Hoy who was there to start the race.
The race was fun!  It’s fair to say the first mile was carnage – narrow paths, too many people and a couple of points where we were forced to stop & walk due to congestion.  However, after the first mile or so the pace & course sorted itself out and I had expected it to be busy anyway.  It wasn’t a great view, if I’m honest, we’re talking tractors, diggers and a lot of what resembled a building site, but it was still the Olympic park and we all knew where it would finish.  The course weaved around the Park and we passed the Velodrome, the Copper Box and the Orbit.  There were several points where you could see people running in the other direction, I shouted out to a super speedy guy in a Chaser vest and he waved at me, everyone was in great spirits.
After about 4.5 miles we rounded a corner to the outside of the stadium and there was a glimpse of the track through the gap.  I turned to the guy next to me and said ‘wow, just look at that’, he simply agreed.  However, we would have to wait a bit longer as the course took us through the tunnel that ran under the stadium.  It seemed to go on and on but the organisers were playing Chariots of Fire into the tunnel to get us excited and the anticipation was rising.  Nice touch!
Finally WE WERE THERE, we were only bloody well running through the arch onto the Olympic track!!  It was phenomenal.   The stadium was full of spectators cheering, shouting, making noise and wanting you to run faster, what a sight – you can just imagine what it might have been like on Super Saturday.  That last 300m all went a bit too quickly, I tried to look for mum & dad in the crowd but couldn’t spot them, then the last 100m came around and the only thing left to do was put my foot down and run like Mo!
Action shot, just casually keeping up with the boys…

I crossed the finish line and felt a little sad.  It was over.  I knew I’d definitely be back if they repeated the event next year.  I got my goody bag and medal and it didn’t take long to find my way back to where Mum & Dad were.  It was great to sit there and take in the atmosphere, just watching people run round the track enjoying themselves.All the runners were buzzing, massive smiles, people whooping at the crowd, dancing, taking photos and videos, everyone was loving it!  It was a lot of runners first time in a race environment and I hope they enjoyed it as much as me.   We stayed to watch some of the entertainment, the sun was now out and Little Mix went on stage to perform some songs.
Paula coming back to high five some of the quicker runners, what a ledge! 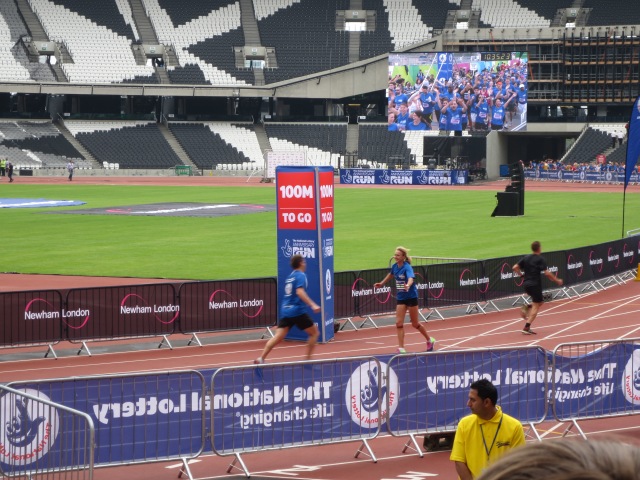 In conclusion, the race was superbly organised, everything went smoothly, it was a lot of fun and, yes maybe the race t-shirts were a bit big, but it was value for money and I got to run round the Olympic track!  On the last 100m stretch I was even thinking to myself, I wonder who was running in this lane last year…
I’ll never know what it was like to be Mo or Jess or Greg on that night that will go down in history as one of greatest nights in British sport EVER but I did get a teeny weeny glimpse into what they experienced and that was enough to blow me away. 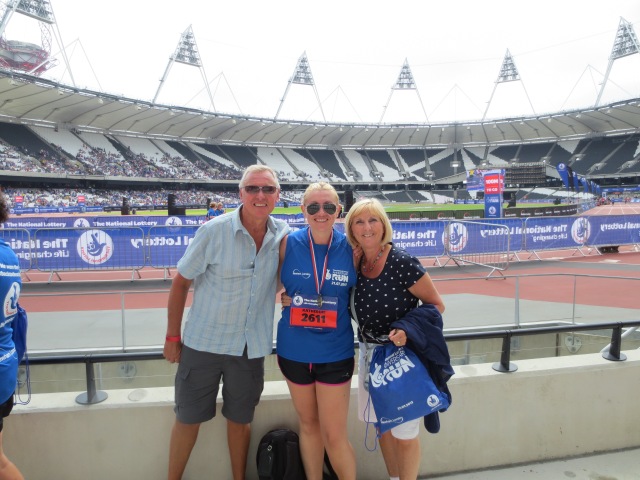 Nike’s women’s only night time race, We Own The Night, was one of the best races I’ve ever run and most definitely the best 10k I’ve ever run. I cannot fault the organisation, enthusiasm, location, value for money, sponsor freebies, entertainment or facilities. Respect Nike, I’ll be back.
Turning up at Victoria Park at 6pm we immediately felt a festival atmosphere. Tents were set up around the park with various things going and there was stage complete with Kiss FM DJs knocking out some tunes.  The place was buzzing. 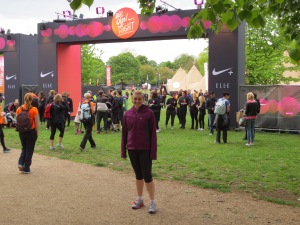 They were handing out wristbands for different start zones but this was a bit odd as no one seemed to know what finish times the zones represented.  Blue was for ‘professional athletes’ or people who ‘thought they might win’, orange was for people wanting a PB and pink for those who wanted to get round.  Obviously I’m not a professional athlete so so I took an orange band.  However, this bothered me, there were at least 3 people each with big bags of blue bands, seriously, how many professional athletes are you expecting? I stood there pondering for several minutes over which start zone I should go for, why did no one know what the expected finish times were? At this point I thought Zoe might get a bit cross with me. She didn’t, she simply told me to put the orange band in my pocket, go and get a blue band and then I could decide at my leisure. Fair point. I did just that. 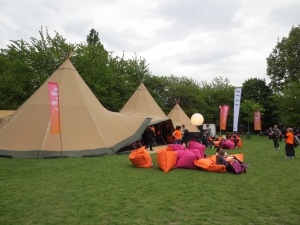 We went into the Elle tent where we were offered a free mag, coconut water and bags of various dried fruit.  Then someone asked if we would like a free Nails Inc manicure? Ermm, yes, yes please! We put our names down and went off to explore the rest of the ‘race village’. There was a caravan offering tea & crumpets, a delightful little meringue stall selling all sorts of different flavour meringues, including gin & tonic, cookies, coffee, more coconut water and a large tent selling Nike gear (obviously!) We took a seat on the large comfy bean bags and waited for our manicures. I went for a bright orange colour (because I needed to make sure my nails matched my race t-shirt), & we found out Paula Radcliffe had been in not long before us getting her nails done too, Paula was here!

We headed to the bag drop off, participated in a little warm up and then it was race time! I stuck with the blue band but I was more than a little concerned that I had only seen one other person with a blue band and she was the rather fit looking girl being interviewed…in all fairness she looked like she could win it. Uh oh.
I have since found out the fit looking girl was Perri Shakes-Drayton!!  She didn’t run, she started the race but my quick evaluation of her was correct!
They asked people with the blue bands to wait behind and I was relieved there were at least 25-30 of us. We were then directed to a different area and I found myself walking to the very front of the race, on the start line, where you usually find the elites, how exciting! Whilst waiting there I spotted Paula and I was even more excited, I didn’t know she was going to run and, not only that, but I was literally on the start line with her, amazing!!
I have actually beaten Paula in a race before.  OK, it was the Battersea 5k Race for Life and she was doing it with her grandma, but she crossed the finish line after me, I beat her, and that’s fact!
In all seriousness, it was an honour & a privilege to line up next to Paula Radcliffe on the start line, when does that ever happen?! I mean, there was me, and there was the female marathon world record holder that no one has even come close to beating in over a decade. What a women, what an inspiration.
The countdown hit zero and we were off, I was expecting Paula to zoom straight off so was surprised to find myself immediately running around her. That was weird, I guess she wasn’t racing after all, laters Paula!
All in all I ran a good race, it was fantastic to have a clear start, there was great support from both marshalls & spectators and it was a beautiful evening in East London.  Special mention to Run Dem Crew who were owning their own night somewhere around 4 & 9k cheering everyone on. I felt the love, I high fived you, you were awesome and thank you!
I usually cross the finish line desperately looking for water and being made to wait,  today water was in my hands in seconds, followed by 2 bottles of coconut water then a glass of prosecco. Yeah, the water can wait, I want the bubbles! It was like walking into a party where the waiters greet you with glasses of champagne on a tray, except I wasn’t looking so glam, and the glasses were plastic. Fabulous, fabulous, fabulous!
I finished in 47.06, not a PB but a good effort so close to the marathon, I was pleased.

I got my bag back and found out Paula wasn’t planning on going the distance due to injury, so I had beat her, again!  In the last month I have raced Mo Farah and Paula Radcliffe and beaten them both!
I found myself a comfy bean bag to kick back & relax on with my bubbles while I waited for Zoe. I had no idea what time the race had actually started in the end so I wasn’t sure when to expect her. She showed up pretty quickly with smiles and we sort out more prosecco which went down oh so very well.  Shall we get some more?  Yeah let’s do that!  I was drunk after 4 glasses so it was only wise to knock back 2 more.  Hey, give us a break we had just run 10k, it was Saturday and we owned the night!

People seemed a bit confused as to why I was spending my Saturday night running…running?  Well, you know what,  I spent my Saturday night with one of my best mates, doing the thing I love the most, with a manicure thrown in, beating Paula Radcliffe and finishing off by knocking back several free prosecco’s. Yep, that was one of the best Saturdays nights in a long time.  Winner! 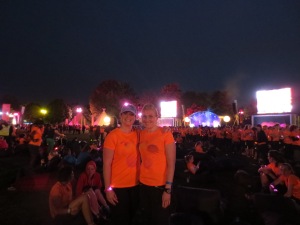 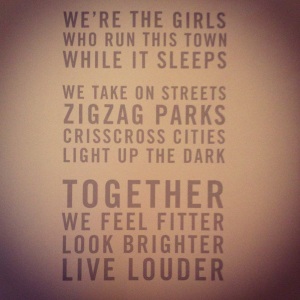