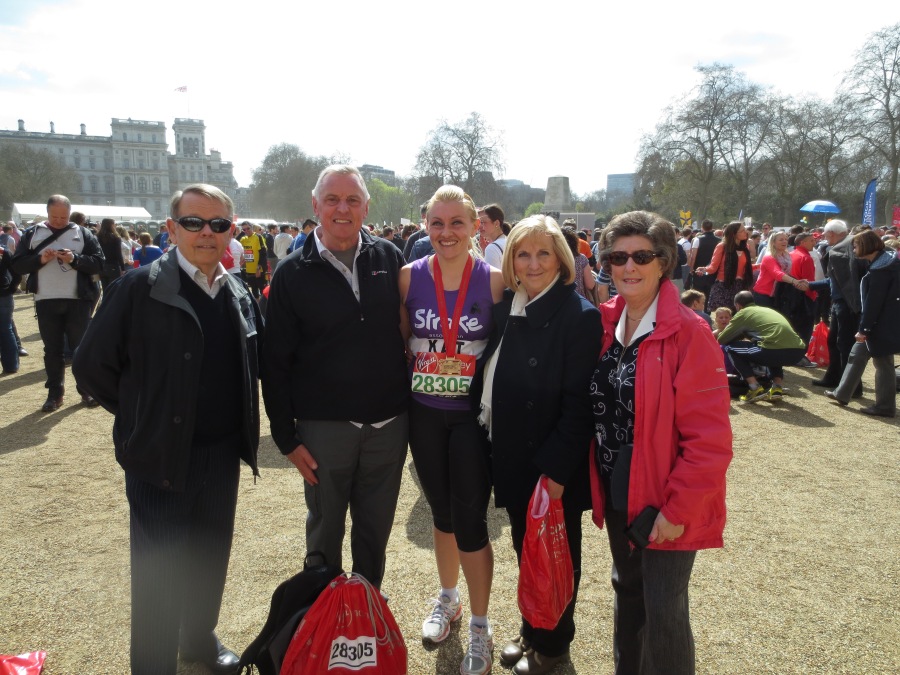 The alarm went off at 5.50am but I didn’t mind, it was Marathon Day, the day I had been waiting for and training hard for since Christmas and I was so excited!   Marathon day is a funny day, it’s a day of possibilities & hope, of nerves & excitement, anything can happen.

Mum & Dad had been staying with me so they were already up & getting ready for their day in the crowd to cheer me on.   My kit bag had been laid out the day before so a bowl of porridge & banana later and I was ready to go.  Final check of the important things, race number, timing chip, black ribbon, Garmin, gels and I was out the door.

Walking towards the start line, which incidentally was up a massive hill which didn’t seem to end, I got chatting to a couple of friendly girls who were clearly experienced marathon runners.  I asked them if they would be running with music and they both said no, they didn’t want to miss the atmosphere and the crowds.  That was my decision confirmed; I would be running my first marathon with only crowd noise for support…they were going to have to be good today!

I was in the green start, the smallest start reserved for GFA and celebrities.   It really was small, all the runners around me had also earned their place on the Good For Age start line and I felt privileged to be there.  Runners at the green start are given as clear a start as possible, without getting in the way of the elites, champs and fast GFA’s who were at a separate start area.  I kept an eager eye out for some celebs but didn’t catch sight of anyone, at least no one I recognised in lycra.  Myself and Marie, one of the girls I had been chatting too, queued up for the toilet, sorted out our kit and fuel belts and headed to the baggage lorries.  This was it, no turning back, nothing left to do but grab a bottle of water and head for the start line.  It was really happening, marathon round 3.

The start line itself was tiny, I’m not sure where I’ve seen a start line so small and I’ve run a lot of races!  I waited at the front of my pen for a while before spotting the RW 3.30 pacer, Matt Dunn, heading for the back of my pen.  Decision time; I had been toying with the idea of trying to run with him part of the way, I knew I couldn’t go the whole way with him but if I could at least get half way I would be in a strong position and could then drop off.  At this point I figured I didn’t have much to lose, if I couldn’t keep up I’d drop back, no problem.  I know it’s not an ideal strategy, and one that would not go down well with Paula, but this was my race and I had to do it my way, even if I failed.

Before I knew it they were introducing the elites on the big screen, starting with Mo.  There’s been a lot of controversy around Mo’s decision to run the first half of the marathon and my thoughts on this are probably worthy of seperate blog post, but in short, he’s a double Gold Olympic medallist, let him do what he wants, he’s earned that right.

Then there was the 30 second silence in memory of those who died at the Boston bombings just 6 days earlier.  The bombings hit everyone pretty hard, but it struck deepest with runners.  This was an attack on our community.  This was an attack on a day that should have been filled with happiness & achievement, of celebration & joy, a day that brings people together.  In the heart of runners, all around the world, we felt it, and it was still raw.

The silence was pretty moving with everyone falling completely still. There were some tears in peoples eyes.  A few moments after the clock struck 10, the gun went off and we were on the move, we were ON THE MOVE!!

We started off pretty easy, the course was crowded but not so much that you couldn’t move through people and I kept steady with the pacer.  By mile 2 we seemed to be dropping pace, I think he was having trouble getting through the crowd with the group around him so I started to just run at my own pace.  Looking back this was an error, I accidently clocked mile 3 at 7.44 and mile 4 at 7.52, what the hell was I thinking?!  I needed calm down.

I managed to keep a steady 8mm pace until around mile 10 when I felt a twinge in my right calf, I guess it was telling me to slow down but I wasn’t too worried, I hadn’t had a problem with this calf before so I had faith it could go the distance.  I wouldn’t say I was starting to flag at this point but I was fully aware there were still another 16 miles to go and I couldn’t go on at the current pace, I had to drop it.

Although I dropped my pace, I kept fairly steady and took in the sights.  One of my favourites was the magnificent view running across Tower Bridge just before the halfway point, especially as this is where the crowds start to thicken and are going crazy.  When I say crazy, the crowds were immense, absolutely fantastic.  There’s constant cheering, noise, whistles, ‘go on Kat, you can do it’.  Don’t ever underestimate the power of your words to a marathoner runner.  We hear you.  We’re listening.  You really do keep us going!

It wasn’t until mile 16 where my earlier miles came back to haunt me, I knew I was going to struggle. What a surprise.  The sun was out, it was too warm, my calf was aching and I was losing energy.  I tried not to be too hard on myself, I knew the risks going off at that pace and I was fully aware of the consequences, time to suck it up and power on.

The miles started to tick by quite slowly but people kept shouting my name, telling me I could do it, offering me jelly babies & smiles, telling me that I was nearly there, and all those things that you just want to believe at that moment.

Mile 20 was a welcome relief, it was just 10k from here, my family & housemate Zoe would be at mile 22, friends from work would be there with a big ‘Go Frenchy’, banner, other various people I knew would be in the crowd, and I knew the finish line would be there…somewhere. 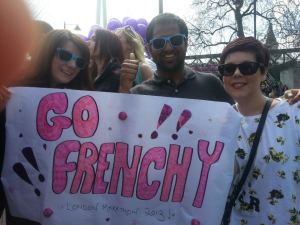 I remember Dad standing there with a camera pointed at me and Zoe shouting ‘you’re awesome’ and I grabbed her hand.  It’s such an unbelievable lift to see friendly faces when you’re so tired, struggling, wondering if you can actually do it.  After that I knew I was so close, the crowds were absolutely insane, relentless, loud, shouting, willing you to succeed, to get to the finish line, how can you not find strength in that? 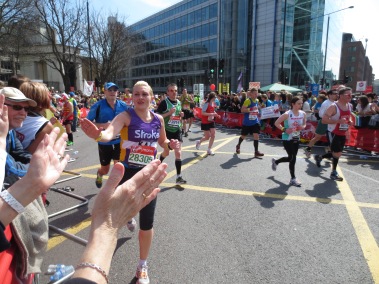 Finally I was almost there, mile 25 had passed and I’d even seen my friends Theresa & James in the crowd shouting at me which was a great surprise.  Then the finish line was in sight, I’d rounded the corner on The Mall and there was one final stretch to go.  Glancing at my watch I knew I’d missed my PB but I was already over it, it didn’t matter, it really didn’t matter, I was about to finish my third marathon!!  This didn’t stop me attempting a bit of a sprint finish though, there was no excuse for a weak finish in my mind.

I went over the finish line in 3.50.39 and ran straight into Dickie.  You know, Dickie B? OK, you might know him as Richard Branson but me & him are mates now you see.  He shook my hand, smiled  and I even thought of giving him a big sweaty hug…don’t worry, I didn’t!

The rest was pretty smooth, tag comes off your shoe, medal goes round your neck, goody bag, photo and then you find the baggage truck with your belongings.  It didn’t take long to find my fabulous supporters, they were waiting in the ‘F’ section, as promised, with hugs and smiles and we all went to the pub.  A champagne cocktail, a chicken salad, a massage and I was happy!

So that was it. I had run marathon number 3.  Not only that, but I has raised nearly £400 for my charity, The Stroke Association.

I ran for Boston.  I beat Mo Farah.  I had a bloody brilliant day.  And I knew there was more to come, I’m not hanging up my marathon shoes yet. 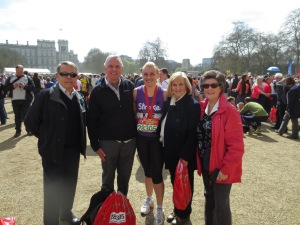 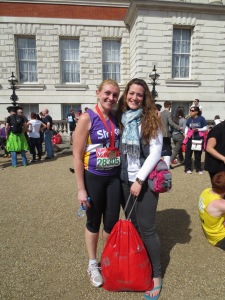 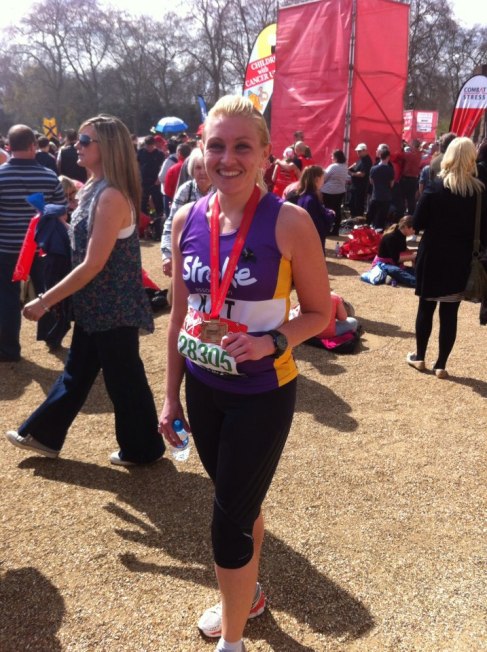