Ever  since I decided it was a good idea to knock out 2 marathons in as many weeks I have not run well.  Not in races, not in training, not at all.  It’s been frustrating, tedious and boring, and that’s just for everyone who’s had to listen to me go on about it.

I signed up for the Amsterdam Marathon with high hopes of running sub 3.45 and securing a good for age in London, it’s only 2.5 minutes off my last autumn marathon time, surely it’s achievable?  However, as time goes on, I’m becoming more and more certain it just won’t happen. Not this time.

A few of my friends have been following the ‘P&D’ Marathon plan from the book ‘Advanced Marathoning’ and have found it successful.  So I bought the book and have been doing my best to follow the 18 week plan…

OK, so I haven’t actually read the book but don’t tell them that.  I didn’t even read my assigned books in English Lit at Uni  (have you ever tried to read Jane Eyre?!) I just watched the films and hoped for the best.  I have tried to read it but I’m just soooo tired all the time and….zzzzzzz……

Anyway, I know people who have read the book and ‘Coach Keith’ regularly emails me with extracts from the book and tips and so I just pretty much do what he tells me!

There are 3 different levels of the plan, I’m doing the ‘easiest’ one and it’s exhausting.  Apparently the key is the mid week long run, it’s based on the theory that one long run a week is not enough and there’s a 10-14 mile run mid week.  After a day at work.

Obviously this requires a bit of forethought.  A couple of weeks ago I didn’t have time for a proper lunch so grabbed a yoghurt and bag of crisps, turns out that’s not great fuel for a 14 mile run and I was forced to cut it short at 10.5.  I now eat a proper lunch on mid-week-long-run-day!

What’s worrying is that all my runs have been slow, slower than I have ever run during marathon training.  My weekly mileage isn’t that much higher but I just can’t seem to run very fast and hitting marathon pace during a long run is almost impossible.  It’s just one slow run after another and I can’t really see how that will change in the next few weeks.

I had a brief increase in confidence last Sunday after a 10k race I entered on a whim.  It wasn’t my fastest but it was definitely faster than I’ve raced in months and back within an acceptable range.  I even felt pretty good throughout and finished strong (as Coach Keith instructed).  But this week has been exhausting again and I skipped an 11 mile run yesterday.  One step forwards, 2 steps back?

I don’t know what will happen in Amsterdam or whether the plan is working but I know I’m not ready to give up. 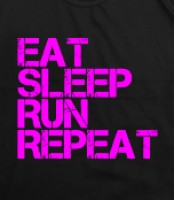 One thought on “When one bad run leads to another…”