I absolutely love love LOVE the new This Girl Can campaign, it’s sweaty, raw, bold and a little bit sassy.  It only launched earlier this week and has already drawn attention from the likes of Missy Elliot, Susanna Reid, Martina Navratilova and Elle Magazine as well as a whole host of influential journalists.

Developed by Sport England, the campaign is designed to inspire and encourage women to get active and get involved no matter what shape or size they are (this even kicked off with a 90 sec TV ad in Corrie, that’s kinda a big deal in my world).

Research showed that it is fear of judgement and body image issues that stop many women taking up sport or exercise.  They worry that they’re the wrong size, or will be perceived as not fit enough or skilled enough to go for a jog or attend a Zumba class.  What will people think? 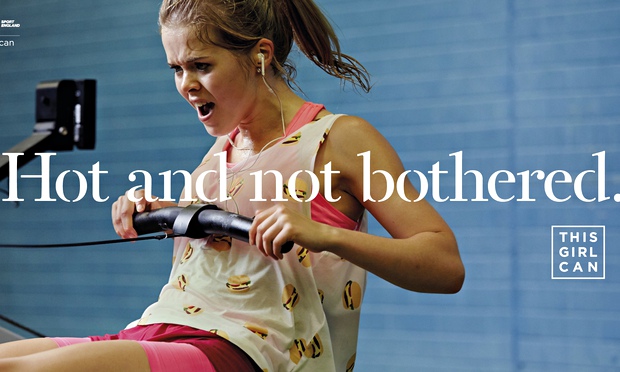 Last year Beth Tweddle wanted to bring women’s sport into the spotlight and took part in a live Q&A with session with Sky Sports. Sadly, what followed was an overwhelming barrage of offensive, sexist, disrespectful and downright foul abuse on Twitter.

Beth Tweddle is a 2012 London Olympic Bronze medalist.  She has 3 Gold and 2 Bronze medals at the World Championships and a whole host of other medals and achievements across her career. She is a successful and brilliant sportswoman and it’s a travesty the spotlight was cast for all the wrong reasons.

Unfortunately, it’s this kind of idiotic and cowardly behaviour that make people, and women in particular, feel judged and shy away from trying something new.

This Girl Can celebrates active women of all shapes, sizes and abilities who proudly wear their Lycra, sweat until it comes out of their eyeballs and just get on with it, no matter what they look like and what anyone else may think.

It’s a really refreshing approach to a topic that usually focuses on exercise to lose weight and get skinny.  Too often body shaming is a tactic to make women feel like they aren’t good enough if they don’t look like the models in the ads and articles.

This is real women doing real things without the airbrushing and stylists, it’s ordinary people giving it a go, getting fit and sticking two fingers up at anyone with something negative to say. And the best bit? They’re having a lot of fun doing it. It’s pretty damn empowering.

I for one think it’s bloody ace! #ThisGirlCan. Enjoy

One thought on “This Girl Can”