Meeting your heroes.  It’s always a risk.  How can they ever live up to your expectations?  You put them on a pedastool and marvel at their achievements, but, through no fault of their own, you may very well come away feeling just a little disappointed.

Chrissie Wellington is one of my heroes but, having met her before, I had no doubt she’d be as inspirational, funny and friendly as ever (she even came to cheer me on at the Rome Marathon….well, she was there…and she cheered!)  I’ve said it before and I’ll say it again, Chrissie is phenomenal.  Not only is she 4 x World Ironman Champion, but she’s won every single one of the 11 Ironmans she’s competed in. 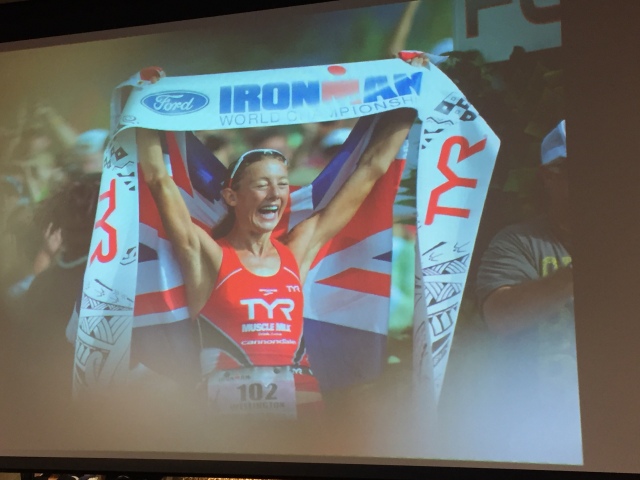 It didn’t come easy.  Having battled an eating disorder, teammates who were often jealous of her ability, more than a few dodgy hotels the night before competition, wetsuits that made her sink, and numerous falls off the bike (one which left her with 3rd degree burns just 2 weeks before Kona…which she went on to win), she showed the world what it was to be a true champion.  I only wish more people knew about her journey.

Last week, we were lucky enough to have our very own session with Chrissie, I was soooo excited I bounded out of work on the dot, still on my conference call, because I really didn’t want to be late.  Absolutely could not be late for Chrissie….

One of my favourite things about Chrissie is that she’s very down to earth.  She started by saying she had just come from an event with Prince Philip and had to get changed in a McDonald’s toilet on the way to us!  Apparently we’re much more fun than Prince Philip too 🙂

Growing up in Norfolk, Chrissie always wanted to be a tractor driver when she was little, she loved fancy dress and was always a sporty kid with a passion for swimming.  She went on to tell us about her life at uni where she captained the swim team, but was actually much better at drinking for them than swimming for them (which, if true, she must be one hell of  a drinker!)

After uni Chrissie started to take running a bit more seriously and knocked out her first marathon in 3:08, she had a knack for it.  With skills in both swimming and running, it was suggested that she try her hand at triathlon and, after a few sprint and Olympic distances, she became hooked on the activity that would see her become one of the most inspirational women in sport.

It’s important to add that, whilst Chrissie was so good at triathlon, she didn’t have the fancy equipment to go with it.  Far from it, her first road bike had 2 previous owners and her wetsuit was was second hand and didn’t fit, she didn’t care, and I think it’s this attitude that made her into such a strong competitor.

During a secondment in Nepal, Chrissie discovered the joys of mountain biking.  She quickly learned that running wasn’t an option, unless you wanted to get bitten by rabid dogs (which did happen), and swimming was totally off the cards unless you were prepared to be violently ill.   So, she bought a bike called Prem (Nepali for boyfriend) and developed the kind of mental and physical strength you only get from consistently battling sand storms and snow at altitude.

After returning home, getting a coach, and making further improvements in triathlon, Chrissie made the brave decision to turn pro in 2007. No ‘what if’s’.  It wasn’t long before she made the start line of her first Ironman (2.4 mile swim, 112 mile bike, 26.2 mile run), smashed it, took the win, and qualified for the World Champs in Kona.

Following this, Chrissie Wellington became 4 x World Ironman Champion in Kona, as well as winning every other Ironman distance triathlon she entered, all the while remaining humble and fiercely dedicated to her training.  There was a lot we could learn from her!

Your mind in your most powerful weapon, train your brain

“Accept that you are not a professional athlete. The aim is to be the best in the context of your life”

We finished the session with a team photo in which Chrissie was more than happy to wear the Chaser vest!

I came away from Chrissie’s talk feeling pretty inspired about sport again.  Maybe I can get that Boston Qualifier after all, don’t be afraid to take a chance right?  Huge thanks to Chrissie for sharing her top tips, her enthusiasm, encouragement and for simply being herself, you’re our favourite!

They say you shouldn’t meet your heroes.  Don’t listen to what they say. 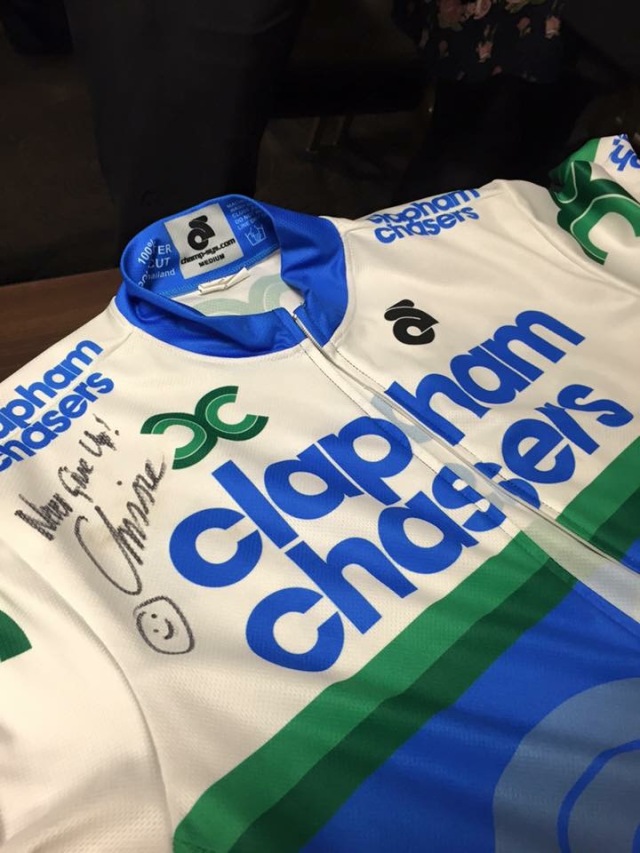 5 thoughts on “When Chrissie met the Chasers”