It probably won’t surprise you that the thought of a DNS next to my name horrifies me.  It doesn’t really matter what the reason is, or how sensible it might be, I don’t cope well with the mental anguish of feeling like I failed before I’ve even started.  When I woke up on Saturday I felt dizzy, sick and completely drained, but, worse than the thought of dragging my arse out of bed and into the gale force winds, was the thought of a DNS, I couldn’t be a DNS in the motherland.

Saturday was the Dorset CTS, one of the races in the Endurance Life Coastal Trail Series.  There are 10 in total around the country, but Dorset is only one of 2 labelled ‘extreme’, meaning it’s utterly brutal on the heart, lungs, legs and, potentially, the soul.  Dorset also happens to be my home county, and World Heritage site Lulworth, on the Jurassic Coast, is one of the most stunning locations in the UK.

Durdle Door on a sunny day!

Home to both Lulworth Cove, a remarkable landform that attracts swarms of tourists, and Durdle Door, a natural limestone arch that juts out in the sea, as well as rolling hills, coastal walks and cosy pubs, it’s a trail lovers dream.  As you know, I’m undecided on my love of the trails, but I do love Lulworth, Chaser weekends away and cosy pubs!

There are 4 choices of distance, a 10k, 16 miles (they call this a half), full marathon, 33 miles and a whopping 45 miles for the clinically insane (Russ did this one last year…)  I had entered the half but, having not run for 3 weeks due to a calf injury, I wasn’t sure how that would go…

I headed down with the usual suspects, Frankie, Albro, Russell and Lorraine, and the train journey was full of the usual banter, G&Ts and crisps.  Russ thoughtfully broke out the Scorpion Chilli Death Chocolate because, well, what else would you eat before an extreme trail race?

On arrival in Wool, we dutifully headed to the pub to disturb the locals on a quiet Friday afternoon.  Frankie was running the marathon the next day but was still successfully sinking an impressive amount of beer!  However, after a pub dinner with the rest of the Chaser crew I started to feel really sick…

I’ll hold my hands up and say the alcohol probably didn’t help, but it usually takes a lot more than that to make me sick, and it certainly doesn’t make me shiver.  I sadly took myself home to bed whilst the others stayed in the pub of many ciders.

The next morning I truly felt dreadful and had zero energy, I had barely slept all night and could only manage a cup of tea and half a slice of toast.  I made a sensible decision to downgrade from the 16 miles to the 10k.  It’s one thing to push yourself through a few miles but 16 is actually quite a long way, the winds were crazy and the course was tough, as much as it hurt, 10k was more than enough today.

Heading down to the start I realised just how windy it was, apparently the winds were up to 50+ mph when you got up to the exposed areas along the front.  I had made the right choice.  It was easy to downgrade at registration and, unsurprisingly, I wasn’t the only one and bumped into a fair few other Chasers doing the same!

I met Mum and Dad who had come along for spectating duties and we watched the start of the half, the Ultra and Marathon had already started so Cat and Frankie were long gone.  I spotted Chris at about 12 miles in his 33 mile race looking, err, windswept, but strong!

The 10k got started after a race briefing at at 11.30 and the course took us straight up a stoney hill of steps, I started off jogging but quickly dropped to a walk, as did everyone else.  It got windier and windier as we reached the top and I spotted Albro, Russell and Claire taking photos, not sure how they didn’t get blown away…

At the top the view opened up over the sea and Durdle Door and you could see the hills that were to come!  The first 3 miles is made up of 4 hills but, although the descents are more than runable (even for me!) it was a real struggle against the winds and you had to throw a lot of force into carrying yourself forwards.

On one descent down towards the sea, the wind was so strong it was blowing all the gravel straight into my face, I couldn’t see but, hey, free facial?!  The battle against the wind became comically funny as it literally blew you across the course, I was too scared to take any photos in case my phone blew away! 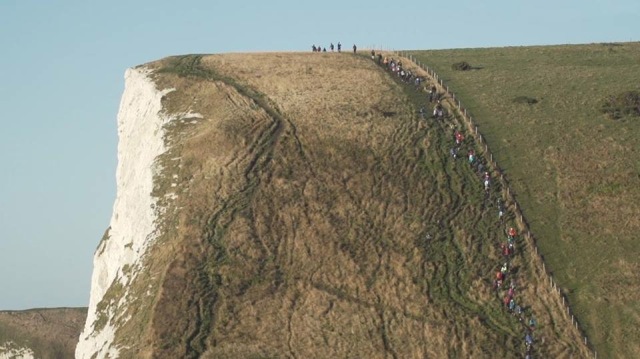 At the 3 mile point, the course turned around and headed back on a pretty much continual slow descent.  Slightly more inland than the completely exposed front, and with the wind behind us, it became much easier to actually run, in fact, it became pretty much impossible to walk as the wind threw you forward.  We ran through a caravan park and onto the final descent down to the finish line, it was quite steep in places which was a hairy experience in the wind!

I got a big cheer as I rounded to the finish line and was really pleased to have finished my first run in 3 weeks, albeit with a slightly sore calf and out of control hair!

The folks were glad I dragged them out on a blustery day! 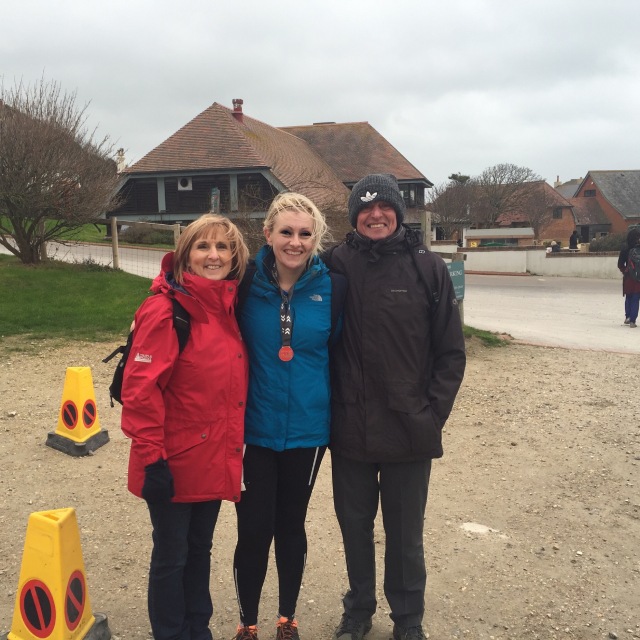 I was a little sad I hadn’t been able to do the 16 miler, but I really don’t think I would have got through it and there’s always next year right?!  We had the usual Chaser success with a win in the half and numerous top 10 finishes as well as Chris facing his previous Dorset CTS demons with an impressive 11th paces in the 33 mile ultra!

In the evening nearly 40 of us descended on a wonderful little pub in Wool for celebrations, unfortunately I was still feeling a little under the weather so I missed the after party but I heard it was a success!

Dorset CTS is a fantastic event, it really is worth it for the views alone, it’s a beautiful place.  If you get the chance to go I would definitely recommend it, just don’t underestimate the challenge, it’s a tough course so choose your distance wisely!

The next day a few of us attempted a cultural day out with a trip to Lulworth Castle, which we did, but Frankie, Albro, Russ and I accidentally ended up spending the next 12 hours in the pub.  In our defense, it was a really, really great pub… 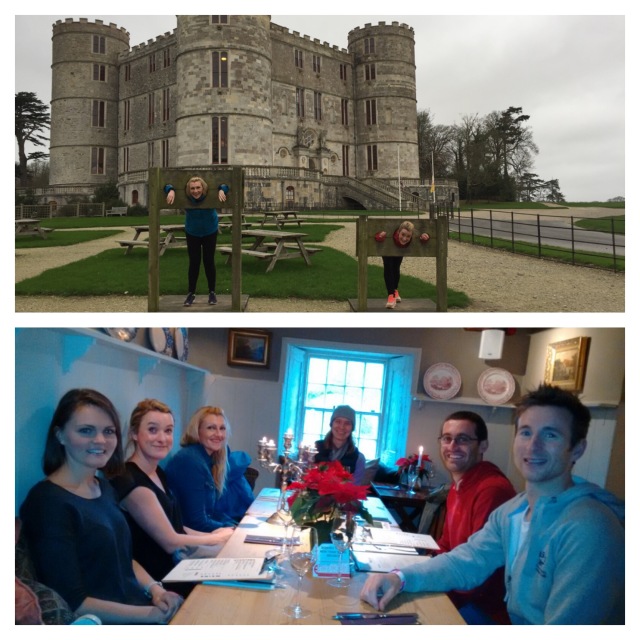 A summary of important run-related learnings 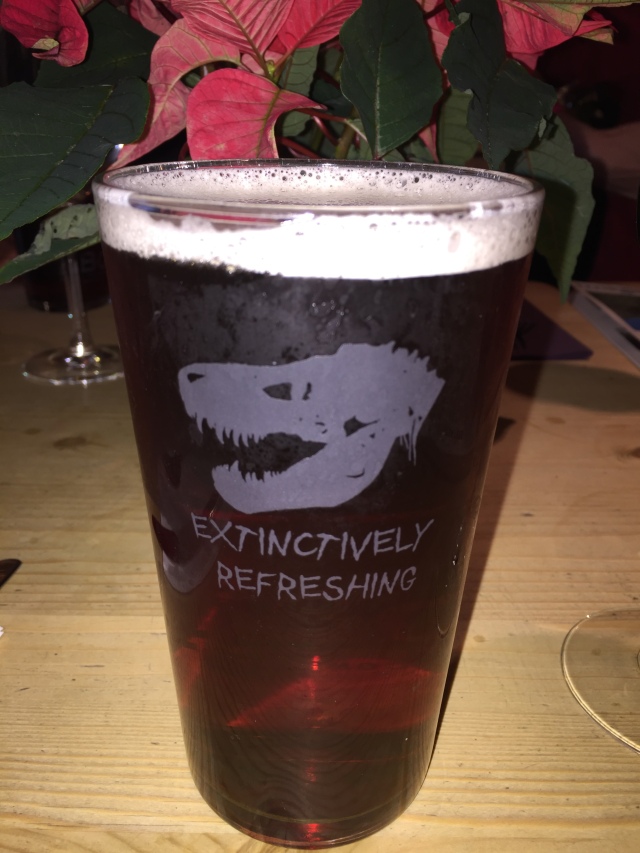