It was 4:15am when the alarm went off on Sunday.  I ignored it.  The first thing you learn about triathlons is that they start early.  As in, you have to get up in the middle of the god damn night early.  It was the morning of the Thorpe Park Olympic Triathlon, our club champs, and I had decided I wanted to be part of a relay team.  At 4:15 in the morning I couldn’t tell you why.

By 4:38 I realised I absolutely had to get out of bed, throw on my race kit, get myself down to Thorpe Park for the briefing, and assure my teammates I was alive and kicking and ready to race.

The lake was ready and waiting 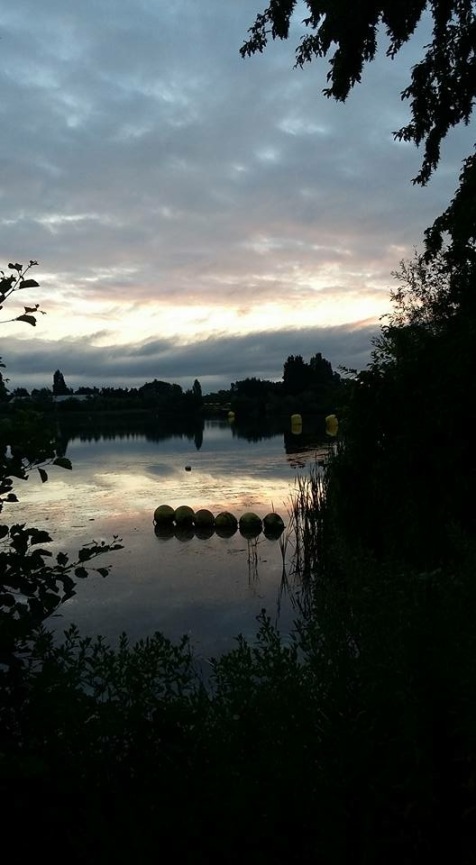 I decided pretty late in the day I wanted to be part of the club champs, there were over 100 Chasers signed up and we were co-hosting with the Tri Project, so my FOMO got the better of me.  On the plus side, I figured if I managed to get in a team at this stage, I would be with other people late to the party so I would be in a ‘slower’ team.  Wrong. So very and frighteningly wrong.

When Rachael said she was looking for a cyclist and a runner to be part of a team I jumped at the chance.  The only problem is, Rachael is a very strong swimmer, she’s practically a fish. I tried not to worry about it.  Then Darren decided he wanted to join as the cyclist… I didn’t know how fast Darren was on the bike, but I knew how fast he was at running and given he’s spent the last year or so focusing mainly on the bike, I could only assume he was up there with the best.  Looks like I was the weakest link then.

We named ourselves the Eye of the Tri-Ger (see what we did there?!) and I quietly hoped they weren’t expecting us to win (OK, maybe not so quietly, in fact I was quite audible about it, especially as Darren had actually been in the winning relay team last year).

The swimmers are off 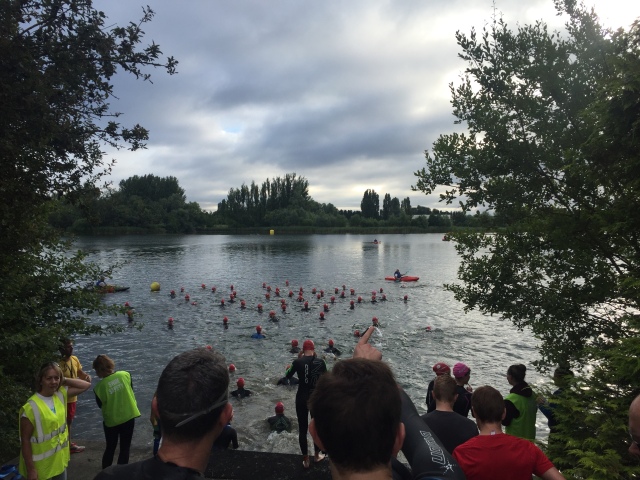 It was 6:10 when I arrived, a little later than promised but I’ve never been a morning person (which may be why I’ve never got into this tri thing…) and it was heaving with friendly Chaser faces.  I found the team, we went to the race briefing and it was time to cheer on the swimmers.  Everyone was together, because there were so many of us, all Chasers, both solo and teams, were in Wave 1.  The water didn’t look as intimidating as I thought it might but we had been warned there were patches of weeds that could cause panic if you got caught up in them so I was glad I wasn’t in there.

After Rachael set off on the 1500m swim, the nerves kicked in.  There wasn’t anything left to do but hang around, go to the toilet 6 times and panic.  It wasn’t long before the swimmers came in, Rachael was, unsurprisingly, one of the first out, a little distressed from losing both her swim hats but otherwise OK, she had smashed it and Darren was off on the 40k cycle. 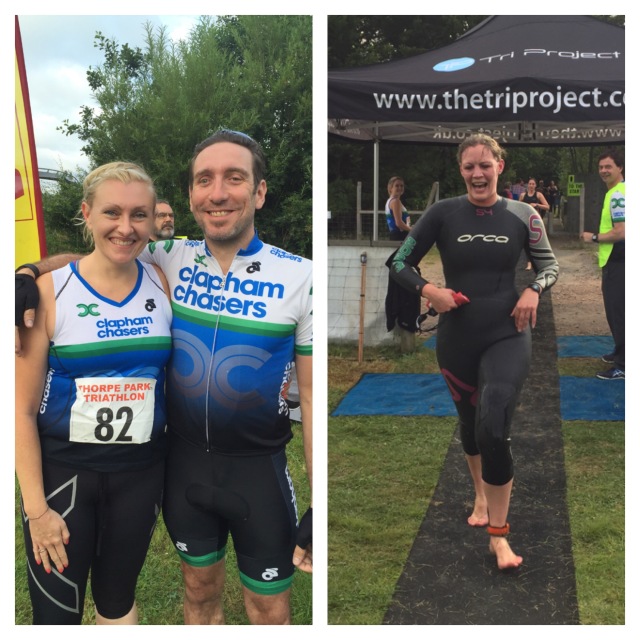 I still had about an hour to kill.  The swimmers were finished and chilling out whilst the runners were pacing around and wondering who would be back first.  We had a lot of quick cyclists out there so it could be a number of people.  The first was back in under an hour, it was one of our solo triathletes, quickly followed by 2 more.  It was really difficult to tell who was coming in off the bike because everyone was wearing Chaser kit, a helmet and sunnies.

The 4th cyclist came in.  It looked like Darren. Was it Darren?  Oh no, it was Darren, he was in 4th place and we were first in the relays!  After a brief helmet issue, the the timing chip was on my ankle and I was off on the 10k run…in 4th pace…whhhaaaaaa.

As I set off, with just 3 people in front of me, I tried to keep my cool and not panic.  I ran up the grass with cheers behind me and rounded the corner to a path.  It was empty.  How exactly do you set the pace on an empty road when you’re trying to race a 10k without burning out too early but still giving it your all?  I didn’t know.  I just ran. 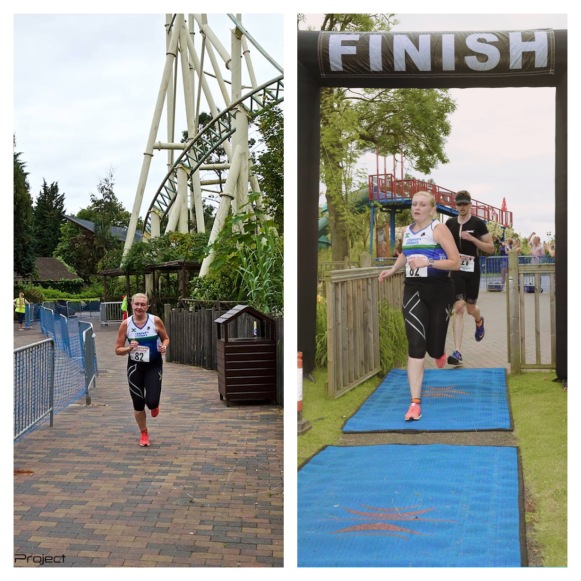 It was warm.  The sun was beaming down and bouncing off the ground creating a mugginess that’s unusual for 8:30 in the morning.  There wasn’t a breeze.  I tried to relax and enjoy the epic lead whilst it lasted.  The course was 3 laps so it wasn’t long before I saw the boys in front of me heading back in the opposite direction.  At 1k my watch beeped, I hadn’t started it properly, dammit!

On the switchback I saw Rich Bull from another relay team, he was about 1k behind so I knew he’d overtake me soon.  He did.  He flew past.  As did several more over the first lap.  I was expecting it to feel quite demoralising being overtaken at such speed, it was quite clear I had no business being in this end of the field, but it wasn’t, because I was surrounded by Chasers.

The course twisted round the park and past a few rollercoasters which was fun, or it would have been fun if my lungs weren’t burning and my legs were moving as quickly as I told them to.  Most of the marshalls were Chasers and at about 3k I saw one of my favourite Chasers (and running mentors) Mike.  He gave me a confidence boosting cheer and I was so happy to see him…I don’t think I smiled. 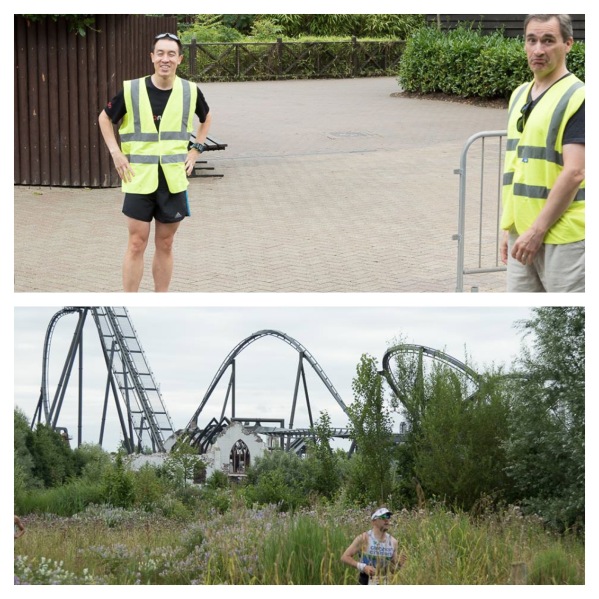 Past a few more rollercaosters was another Chaser gem, Danny, he also gave me a big cheer…I don’t think I smiled.  Before I knew it I was running past the finish line and on lap 2.  By this point the course was busier as more people started the run leg.  I had no idea who was overtaking me and who was still on the first lap although Danny confirmed I was still 2nd woman.

It was still very warm.  On the 3rd lap I simply concentrated on reaching Mike.  He gave me another big cheer.  I still didn’t smile.  Then Danny.  He gave me a cheer.  May have managed a thumbs up.  I then started to speed up thinking the finish was round the corner, but my sense of distance was messed up after starting my watch late.  It went on. And on.  Finally I reached the finish line, a bit of a sweaty mess. 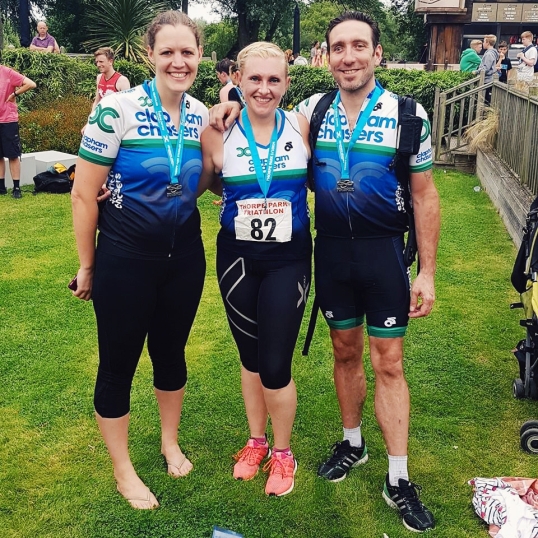 I didn’t know what time I’d run but I knew it wasn’t very fast.  It turned out I’d started the run in 4th place and finished in 15th, of the Chasers at least, I’m not sure where we ended up when all the waves were accounted for (sorry guys!).  Only 2 women overtook me though so it could have been worse. 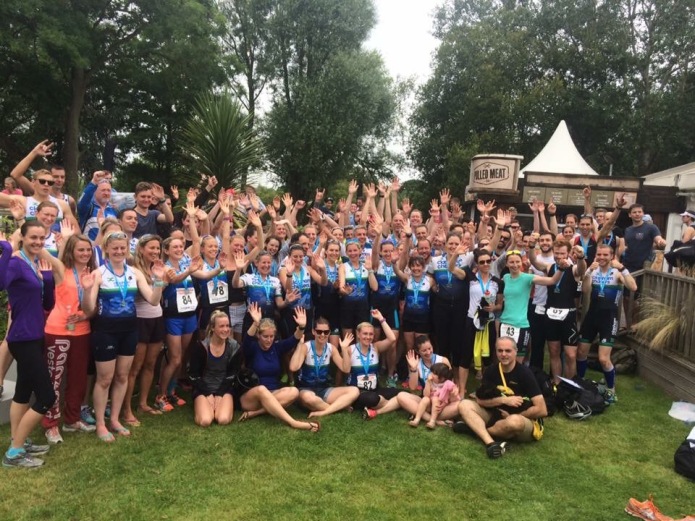 Rachael and Darren found me, we got our medals and ate some cake.  It’s what all good Chasers do.  Despite my fear of letting the team down (completely unfounded fear, no one put any pressure on at all), I had a great time, it was fun to do something a bit different.

Huge thanks to my supportive teammates Rachael and Darren, it was a privilege to race with you, I enjoyed the feeling of being out there in the front for a change! Huge thanks to Mike and Danny, who I genuinely looked forward to seeing on every lap despite my poker face.  And huge thanks to everyone involved in organising such a logistically challenging event.  I may, very possibly, attempt to go solo next year. 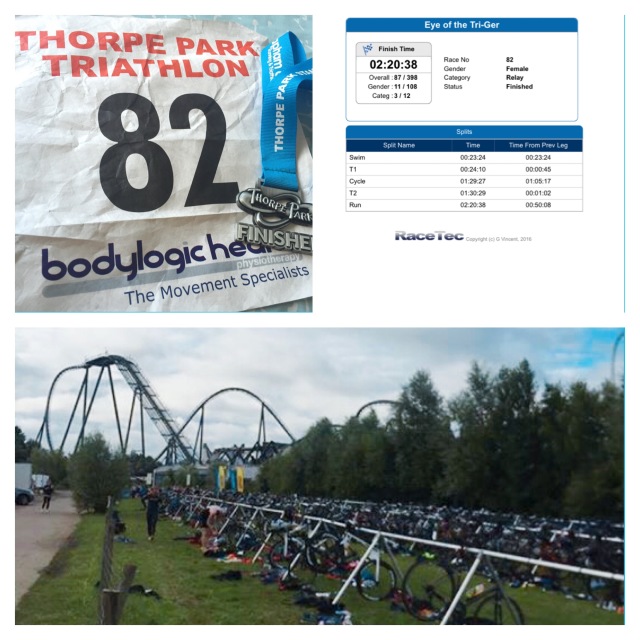 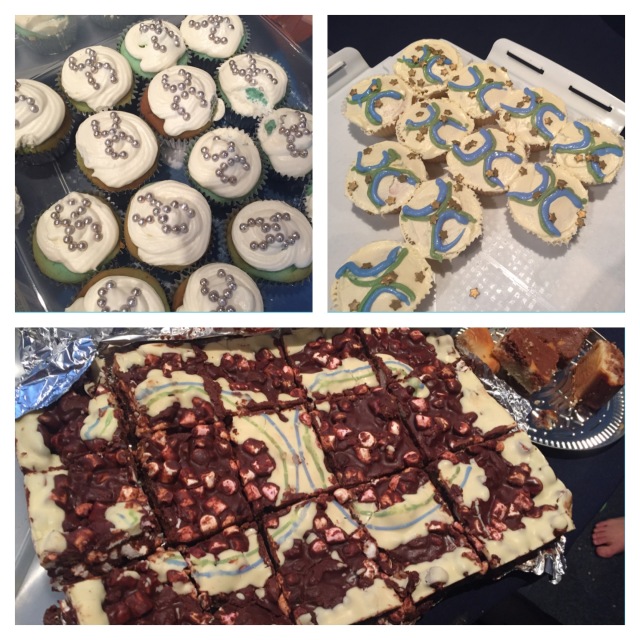 4 thoughts on “Eye of the Tri-Ger: Thorpe Park Triathlon”