So, I went to Boston.  I went to Boston to watch my friends run the Boston Marathon because, unfortunately, I am not quite worthy of my own Boston bib just yet.  Instead, I attempted to console myself by spending £46.11 on the official Boston Athletic Association 5k, to give me full licence to buy the expensive Boston Athletic Association running jacket, because it was the only thing not actually branded with the marathon.  I see how B.A.A make their money…

Bryn, Gaby, Martin, Me and Gemma at the start of the 5k: 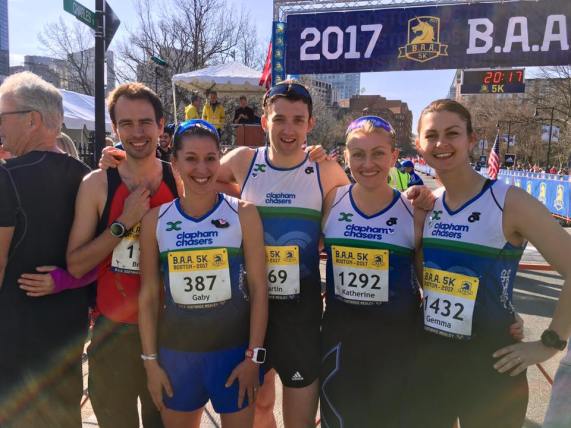 When I didn’t qualify for the race, I didn’t want to go to Boston.  I was grumpy and resentful and sad.  But, as time wore on, I realised that loads of my friends were all going on this amazing trip, all staying in the same house, and were all going to have a great time without me.  I was going to have to add ‘missing out’ to my grumpy, resentful and sad self.  So I changed my mind.

Luckily, our fabulous Phil has some friends in nearby town Newton, with a HUGE house, and there was still space for me!  Together with 11 others, we all went to stay with Joan and Donna for Chasers Marathon Camp.  Our wonderful hosts even came to the airport to pick each of us up!

On the Saturday, 5 of us went into Boston to run the 5k.  I’ve never quite seen such a big set up for a 5k but, with 10,000 people running, it was probably necessary!  The route started on Boston Common and took in some of the marathon course, including running over the official marathon finishing line on Boylston Street, before heading back to the common for the 5k finish.

The route was just as crowded with spectators as I would expect for a big marathon and, with a great atmosphere the whole way round, it made me feel like I was part of the marathon weekend.  Much different to the London Marathon, in which the event is just a day, Boston as a city really get behind the marathon and everyone really gets into the spirit for the whole week beforehand. 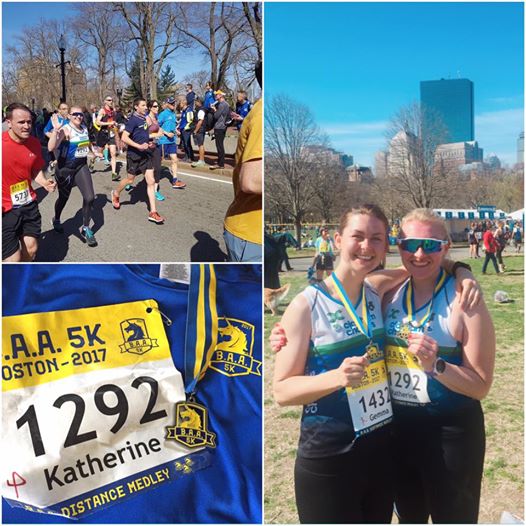 Despite the pricey entrance fee for the distance, I loved this race.  You get to run part of the marathon course, a tremendous atmosphere, and a t-shirt and medal, definitely worth a trot round if you’re in Boston!

To top off a lovely sunny morning, on the other side of town Rob was pacing our host Joan to a big 5k PB in a different race and she was over the moon! 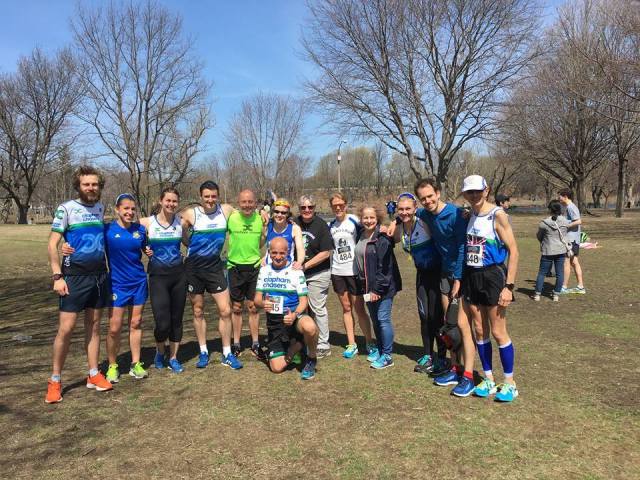 Temperatures were starting to rise and, by the time Sunday came around, it hit 29 degrees.  Perfect for a cider in the sun, but not so perfect for running 26.2… It could be a warm one.

After Joan and Donna put on a big pasta party on Sunday evening, it was an early night for the runners as they needed to be up disturbingly early considering the 10am start time.  Everyone had left by the time I got up on the Monday but I still had Phil and Sally, who were also spectating, as well as Joan and Donna.  Phil, Joan and I went out for a 5 mile run up Heartbreak Hill (part of the marathon route named so because it comes at mile 20!) and, despite only being 8am it was already very hot.

The Best Support Crew in Boston:

After watching the start of the race on TV, we all headed down to mile 20 to watch the elites come through.  Joan’s house is only a mile away so we didn’t have to go far.  Unsurprisingly, there were police everywhere, and everyone was in high spirits.  As predicted, it was hot but we took a blanket and a picnic at set up the Chaser banner.

The marathon app was working pretty well so we knew when our guys would be coming through but the heat was clearly getting to people.  We successfully spotted and got a smile from everyone, with Sally getting a surprise hug from marathon-obsessive Rob, and Gemma telling us off for not having any beer waiting for her.  In fact Gemma didn’t really shut up, we practically had to push her up the road to get rid of her so she could finish…

It was a tough day out there, both the course and the heat took it’s toll on people, but everyone finished in one piece and we even had a PB!

We all love Strava.  We love Strava segments, Strava challenges and Strava stalking.  So when Strava announced they were giving away socks at a pop-up shop in Boston to anyone who completed their ‘26.2 miles in 10 days challenge’, I was almost as distraught at missing out on Strava socks as I was on Boston Marathon branded gear.  There was no way I’d get those miles in by the time I realised.

Shuffling along quietly behind everyone to said pop-up, I watched with envy as they were all given a pair of special socks.  It was fine.  However, as we left the shop, Bryn (who is never nice to me unless he thinks I’m going to cry) actually gave me his socks!

Boston was brilliant.  It’s a brilliant event in a brilliant city and I want to go back.  But next time I’ll be running.