This summer Runners Need are running some exclusive Women’s Running Events held in their stores across London.  I wasn’t quite sure what to expect but when I arrived at the Waterloo Bridge store I was greeted with champagne and Lola’s cupcakes so I was pretty happy already! 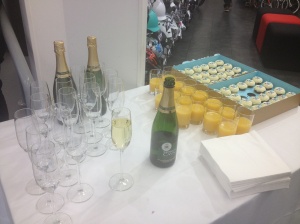 They checked me in then gave me a free Asics’s technical run top (a really good one that I would actually have paid for) in a choice of pink or black. Pink please!  As if that wasn’t enough, I was then presented with a chunky goody bag and went off to find a seat whilst juggling all my freebies and trying not to spill a drop of bubbly or ending up with cake all over my face!

The first guest speaker was Editor-in-Chief of Women’s Running magazine, Christina Macdonald.  She talked about her experiences with running & fitness, problems she’s had along the way and her journey to becoming a marathon runner.

Secondly was Nina Anderson, Britain’s number 1 in W40 200m, 400m, & 800m, and top Running Coach.  She was very inspiring to listen to having tackled all distances from 200m to the marathon and coached people across all levels of the fitness spectrum.  She offered us 3 key running tips

Finally she told us that easy runs should be easy and hard runs should be hard.  If you make the easy runs hard then you can’t push yourself as much on the hard runs.  Makes perfect sense but I’m still guilty of pushing myself a bit too hard on those easy runs…I’m not entirely convinced this means I don’t push myself enough on the hard runs after throwing up on Wandsworth Common during my last interval session but I definitely understand the benefits of taking some sessions easy!

We also had talks from Mike Whitby from Asics and Nora Mulcahy from Covent Garden Physio.

Mike introduced us to the Asics 33 range (named because it considers all 33 foot joints) which promotes ‘natural running’.  Natural running is allowing the foot to run, quite simply, as naturally as possible, much like barefoot running, but still offering your foot some protection against concrete, grimy streets and the occasional dog poo.  It’s a lightweight and flexible shoe with a low heel drop to allow your foot this natural movement and strike the midfoot or forefoot rather than the heel.  The benefits of this are that you land over the centre of mass which means the body utilises its own cushioning properties and therefore reduces injury risk.  Apparently only 15% of runners are midfoot strikers and 10% forefoot.

Nora talked about her transition to barefoot running.  When she started there was little advice available so she made the mistake of heading straight out for a 5 mile run…with a backpack.  This left her calves feeling like ‘they were about to explode’ so she didn’t repeat this mistake!  She stressed the importance of going back to basics and, if you want to transition, you need to build up 1km at a time.  Sounds like you need a lot of patience!  Nora now runs round Victoria Park, completely barefoot, with her shoes in her hands attracting odd looks from the locals.  She loves it!

I’m not quite sure what I think about minimalist running shoes, and I’m certainly in no rush to go crazy and abandon my faithful cushioning altogether, but I have been considering adding a lighter ‘racing’ shoe to my collection.  I had a chat with Mike afterwards and, despite being an Asics rep, he wasn’t all ‘Asics this and Asics that’.  He advised me that I probably wouldn’t have the time to transition to something too light, like the Adidas Adios or Asics Tarther for my next marathon in October, but I could definitely switch to a performance shoe if that was the way I wanted to go (he recommended the DS for me, yes this is an Asics shoe but I told him I was an Asics fan!)

I shall most definitely be looking into it further and will aim for a lighter racing shoe for my next 10k, maybe that’s the answer!

There are still 2 Runners Need events left this year, Victoria & Southwark Bridge, so if you’re a fabulous runner chick, of any level, make sure you get down there, it’s open to all!  Just make sure you register on the website first. 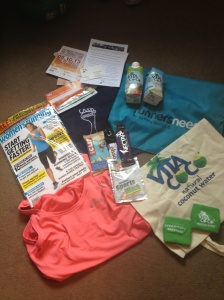