Sunshine, map reading, cider, a bus called Phoenix, and running round the M25 – what more could you want from a weekend?!

The Green Belt Relay is a 22-stage race around 220 miles of the Green Belt round the outside of London over a weekend.  Each team has 11 people and the Chasers had 3 teams participating with around 30 others – it looked like it was going to be a scorcher. 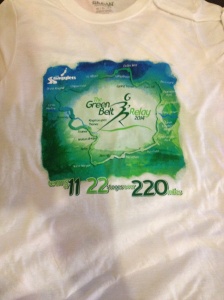 My alarm went off at 5am on Saturday morning, which seemed slightly outrageous, but I tried to remember it was supposed to be a fun weekend and dragged myself out of bed.  I met Frankie and we walked to Clapham Junction to meet the rest of the group where our 3 minibuses were waiting.

As the most important factor of the weekend was to simply enjoy ourselves, Bryn had done an amazing job organising us into teams with a good mix of runners so we could all have a bit of banter and compete amongst ourselves.  This also meant the strongest runners opted for the tougher legs (chose/forced/blackmailed….) which I was eternally grateful for  – I think some of the legs would have almost killed me!

This isn’t your usual kind of race, as there were only 30 odd runners on each leg chances are you would be by yourself for at least some of the race.  One of the race rules is that you carry a copy of the stage map with you, however, for the navigationally challenged (me…Ruth…Hayley…) a map doesn’t always have the answer so I was worried!

Bryn and Hayley had created packs for everyone that included maps of our selected legs, our race number, and details of which minibus we would start and finish the day on so we knew where to put our ‘pre-run bag’ and ‘post-run bag’.  It was quite a logistical challenge to organise 33 people over the course of the weekend and Bryn had clearly put a lot of time into a very complicated spreadsheet outlining timings and locations.  He  really couldn’t have made it any easier for us – which obviously meant we were all confused…turns out we’re not that bright (sorry Bryn!)

We all headed to the start at Hampton Court to collect some race bits and see our first stage runners, Pete, Luke and Marcus, off at 8.30am, before going our separate ways.  We had a group WhatsApp which allowed us to all stay in touch (particularly useful when people still ended up on the wrong bus…Cat, Chris…) and have some banter.  We came up with some team names – Team 1 – Luther Van Lost, Team 2 – No Direction and Team 3 – Marooned 11… 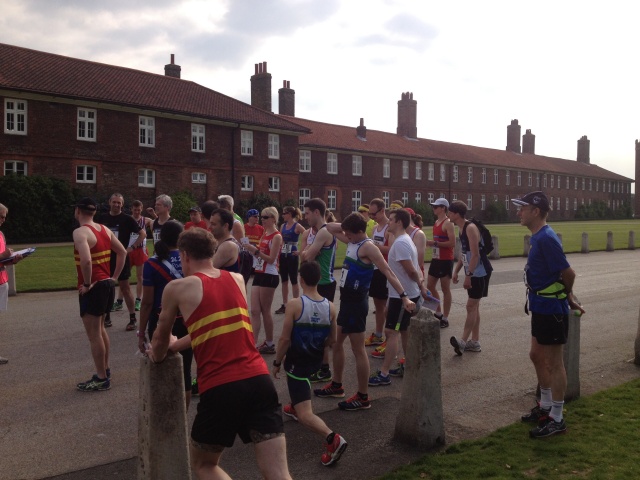 I was in Team 1 and on the second leg with Ruth and Kim which was 9.6 miles from Staines (aaaiiiiii) to Boveney Church.  The route went through Runnymede, Datchet and Windsor, mostly along the river, and had a difficulty rating of 3 out of 10 (with 10 defined as bloody hard!).

All the stages start at a fixed time, rather than when your runner reaches the finish, to make the event run smoothly.  Clutching our maps, the stage was set off at 9.42 and we had a fair few Chasers cheering us over the start line.  It was hot, very hot considering how early it was, so my energy started draining at some point running through a field, getting stung by nettles, that I desperately hoped was the right way after losing sight of the guy in front of me…  Maybe it was time to check the map?

I heard someone shouting my name and realised Kim was just behind me – never been so happy to see her!  We finished the rest of the course together which was helpful as she was a brilliant navigator (having studied the map much better than I had seemed to).  A fair amount of the route was off road, which slowed us down, but it was pretty with a good view of Windsor Castle and there were several marshal points offering water which was gratefully received in the heat!

There were people waiting for us at the finish, cheering us on, and I was done, hot, hot, too hot.  Laying on the grass in a heap Chris said, ‘sorry to rush you but we really need to get going – one of the other buses has broken down’  Uh oh…

Back on the bus I found out that Pete, who ran the first stage for our team, had won it outright!  I wasn’t surprised, he’s a blink-and-you’ll-miss-him kind of runner, but I had very much not won my stage so I felt sad about knocking us some way down the leaderboard after we had such a strong start (goal for next year – learn how to run).

The 2 functional buses made their way to the broken bus (later to be named Phoenix after it was resurrected) so we could rearrange people and get runners to stage 5 at Great Kingshill.  Unfortunately, this meant we were delayed and Mike, Frankie and Cat started 25 minutes late – not ideal for a 13.5 mile leg rated 10…aka bloody hard.

A broken down Phoenix…

We collected the stage 4 runners from Great Kingshill (having also ran a 10/10 leg) and headed to stage 7 in St Albans to be reunited with Phoenix (which was now working) so some of us could marshal and welcome the stage 6 runners, Chris, Clare and Sophie, home.

Phoenix had turned everything into a bit of a logistical nightmare with some runners not getting their bags at the end of their runs, people in different places than planned, more drivers needed (Pete ended up spending most of the day driving) and people having to swap legs, but we wouldn’t let it ruin the day! 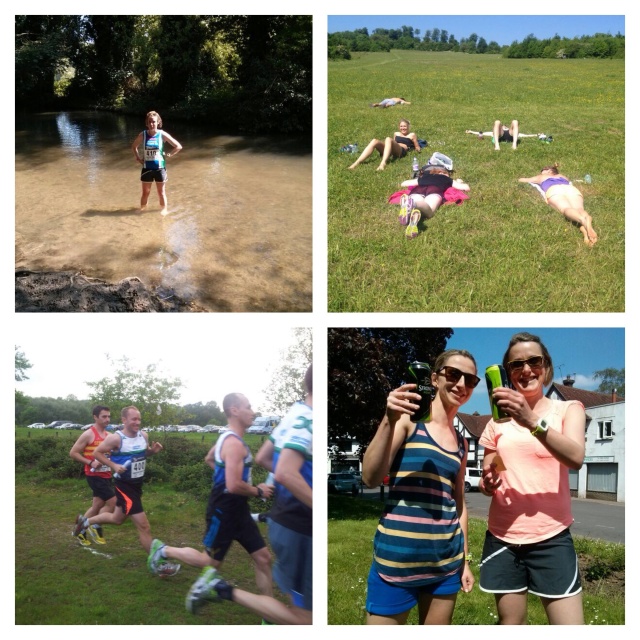 A group of us on Phoenix went to marshal stage 10, somewhere in Essex, and we found out Hayley had also had a fantastic run to win her stage, not only for the ladies and Chasers (and Team 1) but outright – she’s pretty phenomenal!

During my marshaling responsibilities I accidentally sent a Serpie the wrong way – I genuinely didn’t mean to but it put Chris in second place who was conveniently a Chaser!  After we sent the final 2 runners in the right direction (who ignored the map and got completely lost) it was time to head to the end of the last stage of the day to welcome the Chasers home.

We also discovered that bloody Phoenix also didn’t lock very easily – you wouldn’t have though it was a brand new vehicle…maybe Phoenix is an ex Serpie bus?

Chris and I trying to be helpful

As it was now about 8pm, and we had a table at Strada booked for 9, we needed to go straight to the restaurant without a post run shower, lovely!  The Saturday night Chelmsford clientele were clearly unimpressed with our efforts, and we got more than one  funny look – Steve still had mud on his face!

I suppose it might be the first time they’ve seen a group of sweaty, smelly runners, possibly ever, but definitely traipsing through their town whilst they were ready for a night of twerking in 5 inch heels, 2 inches of make-up and an orange tan – there was definitely twerking, we witnessed some (poor) twerking.

After some food and much deserved wine we headed to the Miami Hotel (Essex’s finest) and got to bed sometime around 1am.  And how did the teams stand?  We were in 9th, 10th & 11th overall (pretty good considering the 25 minute penalty) – Chasers 3, 1 and 2 respectively – with very little in it there was all to play for in day two!

Sunday’s 6am alarm was delightful and we were off again.  I was on the second leg on Sunday, a shorter 6.6 mile stage from Thorndon Park to Cranham, with Clare and Sophie.  It was only rated 2 out of 10 but it warned it was a complex, twisty course with a mixture of fiddly urban turns, woods and fields – what could go wrong?  Our minibus headed straight to Thorndon Park  and we sat in the sun studying the map – I was determined to be more prepared today, it felt a bit like revising for an exam.

As we set off I was pretty confident I knew the map – but that didn’t mean it would make sense in real life (for example, does coming off of a dirt track onto grass mean the end of a path?? Apparently not…).  I enjoyed the run a lot more than Saturday even though it was still hot – the course went through some wooded areas and there was a fair amount of downhill.  It went well until around 5 miles where I came across the is it/isn’t it the end of the path bit but eventually I came out of the woods and down the home straight. 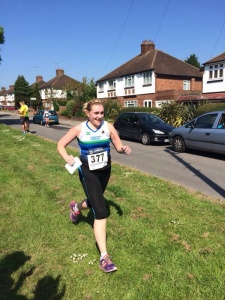 Sunday went a lot more smoothly with all buses in order, although I think Sophie would say her stint behind the wheel through very narrow country lanes was tougher than her running stages, I didn’t envy her!  There were some more tough legs today, including a hilly 13.3 miler, which the boys nailed, and a technical route along the North Downs Way finishing at the top of Box Hill, everyone ran really well.

Our bus (Phoenix, obviously) didn’t have marshaling duties today so we concentrated on dropping off and picking up runners before finding a spare half an hour later in the day for a vodka and diet coke in a can – cheers!

The final leg finished at Hawker Leisure Centre in Kingston where there was a lot of support for the final runners, Juan, Natalie (first lady!) and Ruth, and there were drinks and a BBQ.  It was time to celebrate!

The final results put the Chasers teams in 8th, 9th and 10th overall with Team 1 in the lead clocking a total time of 27 hurs 56 mins – job done!  After some drinks in Battersea, Frankie, Sham and I couldn’t resist last orders in the pub on the way home…

The Green Belt Relay was an awesome weekend with awesome people – thanks to everyone who came, especially Bryn, for being an organisational genius, and all the drivers who became experts at maneuvering minibuses everywhere from country lanes to car parks to motorways.

I genuinely can’t think of a better way to spend my weekend than running round the M25 in the sun!  It seems the only people who believe me are the ones I was with…

Can’t wait for next year, but Phoenix is most definitely not allowed to come!