You’ve been running for hours,…it’s hot…you’re tired..there’s no shade and the sun is beating down on you…you’re desperate for a gentle breeze…you’re thirsty, so thirsty your mouth feels like sandpaper…

…then, like an oasis in the desert you see a water station up ahead. WATER!!!! The marshal hands you a cup of the best water you’ve ever tasted in your life, gives you a big smile and tells you how well you’re doing. What do you do?  THANK THE MARSHAL! 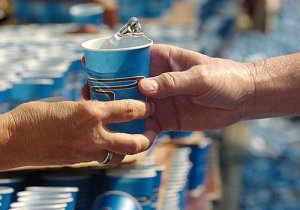 On Saturday I marshaled an event called HellRider.  It’s a non-stop 8 hour off road duathalon where participants complete as many laps as they can alternating between a 5k run and 7k cycle. – you can participate alone or as part of a team.

As a marshal, I had to be in Henley on Thames for 8.30am and wouldn’t finish until 7pm.  I was paid a nominal fee, and I’m aware a lot of marshals aren’t, but, having left my house at 7 and got back at 9pm it was a very long and tiring day!

I arrived on site to heavy rain and lightning – it didn’t look like the best day to be outside with no shelter but I remembered the huge brolly I kept in the boot – knew I put it there for a reason!

When the event was set off (still in very heavy rain) 5 people were taken to marshal different points on the course whilst a couple of us stayed at headquarters.  I was stationed on the run/bike finish line to make sure people were OK, went over the correct chip mat and went through transition smoothly.  Other marshals were out on the course on their own with people zooming past them so I was quite lucky.

As a marshal the events of the day included, but were not limited, to the following:

I know what it’s like to be out there racing, running as hard as you can, and when I was new to races I didn’t always thank the marshals because I didn’t quite appreciate the role they play.  But marshals do a bloody brilliant job making sure the event runs smoothly, water is readily available, and people get the help they need.

So, next time you’re in a race, remember there wouldn’t be a race at all without the marshals and give them a smile or a nod, they really do appreciate it!

HellRider is organised by Trail Plus, the same company that organise HellRunner, and it looks like a lot of fun!

3 thoughts on “Cheers to the Marshals!”