“Cause sometimes you just feel tired.  You feel weak.   And when you feel weak you feel like you wanna just give up.  But you gotta search within you.  You gotta find that inner strength and just pull that s**t out of you, and get that motivation to NOT give up, and NOT be a quitter, no matter how bad you wanna just  fall flat on your face and collapse”

The Marathon is a relentless, unforgiving, gruelling event.  The second you show just a moment of weakness it will turn on you, digging its painful claws deep into your soul draining you of everything you have, punishing you, willing you to fail, laughing at you.

It hurts. Then everything gets a bit fuzzy. 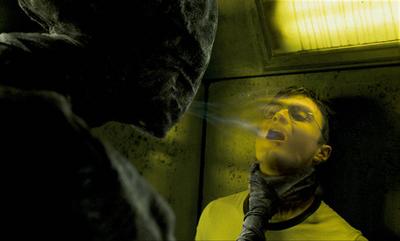 The Amsterdam Marathon broke me.  It broke me early and it broke me hard.  I genuinely started to wonder how I was going to make it to the finish line in one piece and I’ve honestly never felt like that before.

When I arrived in Amsterdam the concept of running 26.2 miles still didn’t feel very real.  Training had been anything but perfect, but that’s nothing new, getting to the start line of a marathon injury free having nailed every training run would put you in a very small minority.

I had started well, ticking off the miles and sticking to my plan, but my lazy bum triggered an injury that I struggled to come back from.  On the plus side, the injury has gone and didn’t flare up on the day, but the consequence of 4 solid weeks of bum exercises meant that the muscles I’m using when I run have changed, and 4 weeks is not long enough to get them used to the kinds of distances I was running.

My physio was brilliant, I did everything she told me and she spent hours painfully ramming her elbows into my leg so I could run without pain, but I was running very slowly.  I just couldn’t do any of my speed sessions, my legs seemed to be tiring much quicker than usual and on my last 20 mile run I stopped several times (in the pouring rain…) 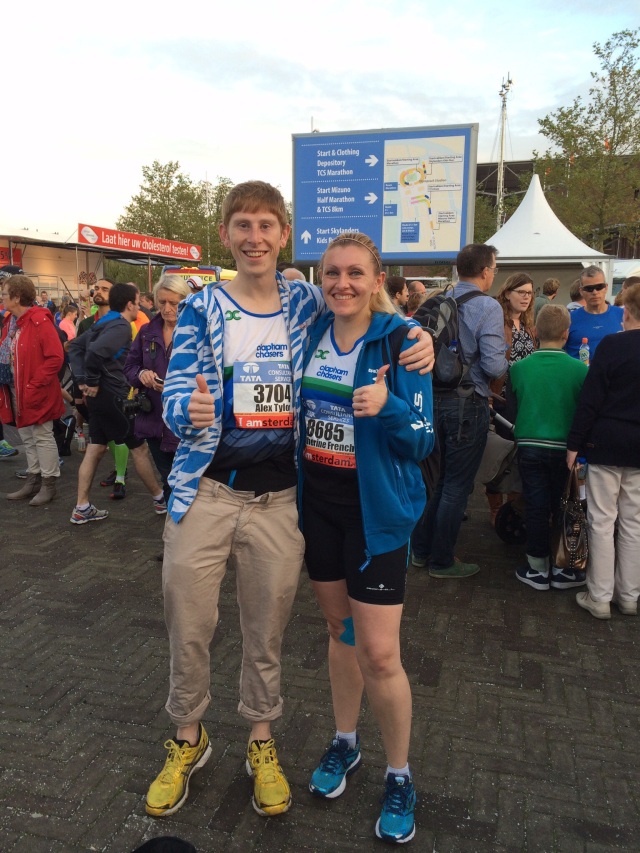 My Mum & Dad had come over to support me so we all went to the Expo on Saturday morning to register followed by some lunch.  I then went back to the hotel for an obligatory day-before-the-marathon-afternoon-nap before going out for a huge bowl of pasta and then back to bed for an early night.

The next morning I went through my usual ritual of force feeding myself porridge and a banana (not easy at 6.30am) and drank tea, tea and more tea (never again will I let caffeine withdrawal get me!) and we went to the station to meet my friend Alex.

The start was at the 1928 Olympic Stadium on the other side of town, which made for a great atmosphere, and Mum & Dad went off to find a seat in the stands.  Alex and I were in the same start pen which I was grateful for as I think I would have mentally crumbled on my own.

We chatted through our pre-race nerves, discussing toilet strategy (standard) and wondering if the dudes dressed head to toe in a weird silver outfit (we thought they were penises, Mum thought they were silver bullets…) would beat us (they beat me, Alex took them down) and then the elites were away and it was time to run! 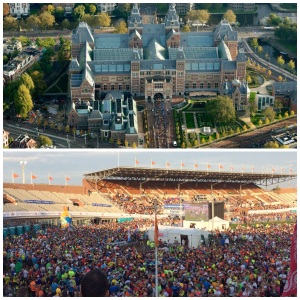 The start was great, I wasn’t sure how I felt about having to run through the finish line to get to the start line, but it was fun to run round the 86 year old track for about 200m before getting onto the road.

The route was pretty, it took us through and around the City, including the heart of the Rijksmuseum (the famous passage which connects Amsterdam city centre with the south of Amsterdam), and along the Amstel River.  I think this was my favourite part as it felt very calming running past stately mansions and windmills, quintessentially Dutch!  As we neared the finish we ran through a very green Vondelpark taking in the trees and ponds, before heading back to the stadium for the big track finish!

Looking pretty cheery at about 4 miles 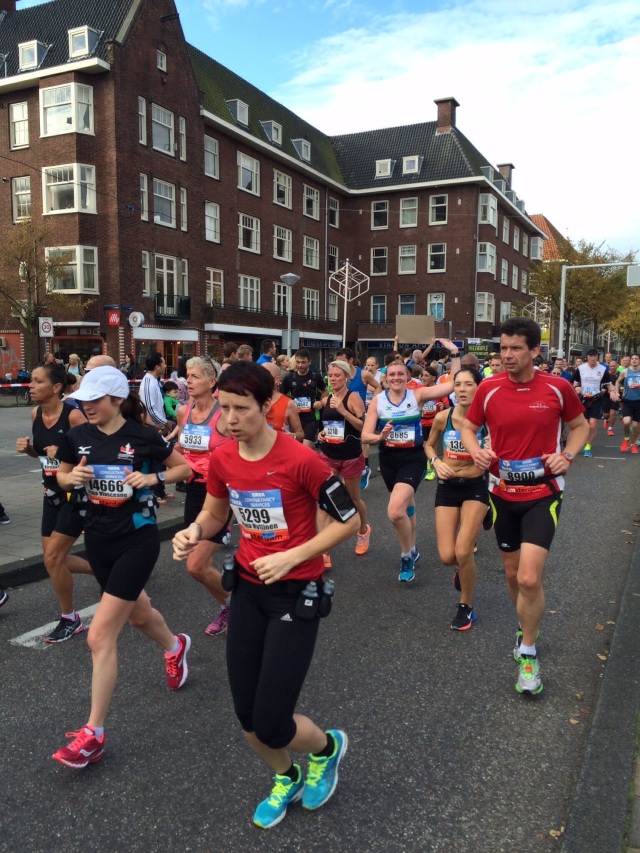 At 7.5 miles I heard someone come up behind me shouting ‘Go Chasers!!’ before realising it was fellow running buddy Ryan.  We had a quick chat, and, even at that point, I admitted I was starting to struggle.

I wasn’t feeling like myself, running felt like such an effort, it was laboured and difficult and tiring.  I think it was around mile 9 when I started to fall apart – I don’t know why, I just wanted to stop running.  So I did…and walked.  When the wheels are falling off at mile 9 you know you’re in for a very tough run.

Unfortunately it all went downhill from there, I tried to enjoy the scenery and take in the atmosphere but I was totally overcome by the need to take regular walking breaks which I normally wouldn’t tolerate.  I felt like such a failure, I was in the Amsterdam Marathon, my parents had come to support me and I couldn’t even run!

Giving up was never an option for me.  The task ahead was daunting, there were still a lot of miles left to cover, I knew people were tracking me online and I knew I was going to finish in a time that would crush me.  But giving up was not an option.

My hardest earned medal. Ever. 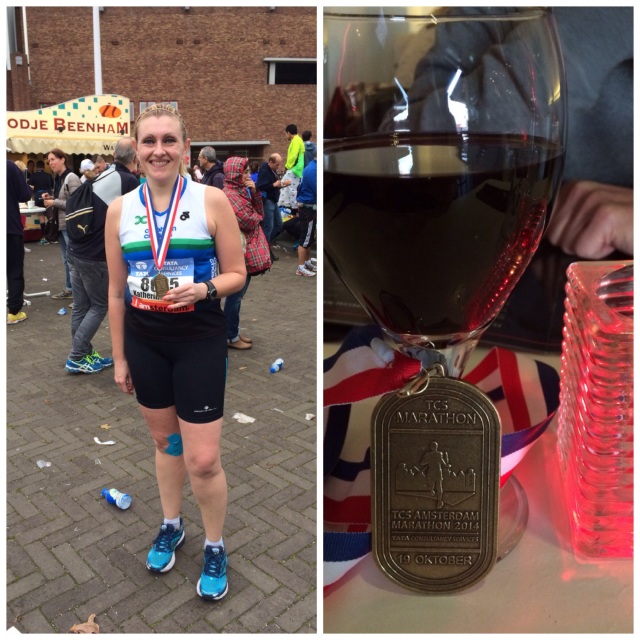 I started a run/walk strategy based on distance and I think sticking to this was the only thing that got me through the last 6 miles.  My watch was ticking away with the time going up and up, my mile splits getting slower and slower and every half a mile feeling like the most difficult thing ever.  I had no idea how long it would take me to finish but I did know it would be my slowest marathon by a long way.

The support was the best spectator support I’ve experienced outside the UK and I fed off it.  Twice someone from the crowd took my hand when I was walking and jogged with me for a few metres, I love those 2 people.  People lined the streets in the last several miles and a lot of people cheered me by name, there was even a ‘free energy’ station where a group of people were having a little street party with a tannoy lifting everyone’s spirits.

Other runners were also very supportive, this really helped as everyone seemed to be struggling so we cheered each other on.  An old boy from Sleaford Striders was a big inspiration for me, he was running with a limp and a bit of a hunch but he was still running!

Eventually I made it through the park and could see the stadium ahead of me.  I was determined to run the last bit and enjoy the track finish – this is were the Olympics were held 86 years ago!  The seats were filled with people cheering us round and I could see the finish!  I tried to spot Mum & Dad in the crowd but there were just too many people to pick them out.

I crossed the finish line, got my medal and just wanted to collapse, I was exhausted! 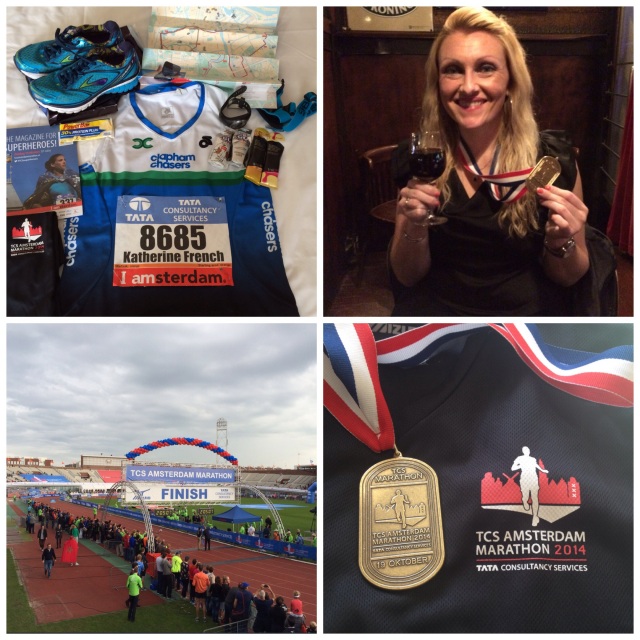 Marathons demand nothing but 101%.  26.2 miles is quite a long way and it’s not easy whatever time you finish in.  Somewhere along the way I seem to have become desensitised to the distance and the challenges it brings.  26.2 miles is actually a bloody long way!

I’m aware I can be quite hard on myself, people tell me that all the time, I expect a lot and it’s disappointing when I don’t meet my own expectations.  Yes, I had a bad race, but one bad race does not make you a bad runner, you can’t run strong and get a PB every time.  Anything can happen in running and these things can and do happen, it’s how you deal with it that can make you stronger.

So I finished the Amsterdam Marathon in 4 hours 50 minutes.  All that really matters is that I finished and had a great weekend in a great city.   As my boss said when I went back to work and quietly admitted my time ‘Who cares? You did it and you were in Amsterdam, well done!’

3 thoughts on “Amsterdam Marathon. The one that broke me”