It’s been about 2 months since I fell out of love with running and I would rather have stuck a pencil in my eye than put my trainers on and jog round London.  However, I’ve always been a bit fickle and since then, I seem to have remembered exactly why I love running so much and I even rather enjoyed my run commute despite the -5 degrees temperature this week!

I think it was a slightly hazy time somewhere between the 4th and 5th cocktail at the Chaser Christmas party when I fell in love with running again.  It was at this time when the ballot was drawn for the Chasers club places in the London Marathon and my name was the first name out!  Of course, I missed the actual event having been in the toilet/at the bar/chatting about life with complete strangers/some or all of the above, which I was pretty gutted about, but I was SO EXCITED to get a place!

Since then, I’ve been firmly back in training for the last 5 weeks and, in a surprising turn of events, it actually seems to be going well…  I’m not entirely sure what’s happened to me, or if I’ve simply been spurred on by the pretty punchy target I’ve set myself, but I’ve been running better than I have for a long time and it feels great! 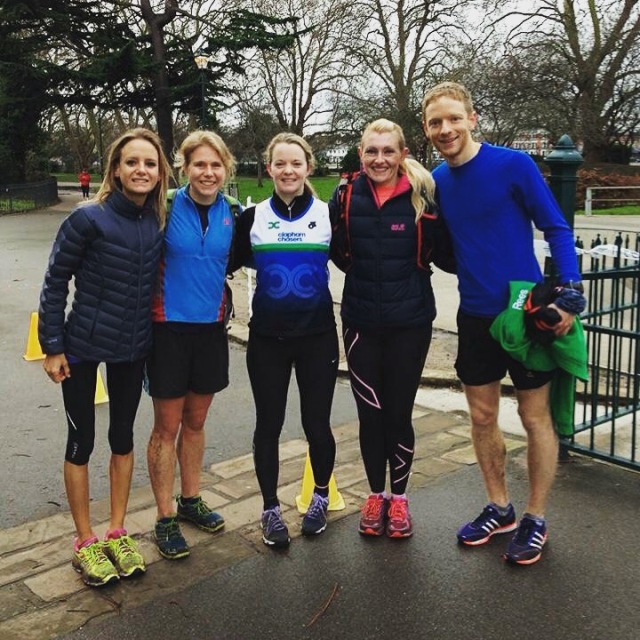 Generally, I’ve learned that really high mileage plans don’t work for me.  I’ve tried it, I got tired, I got injured, I resented having to go for a run, and, importantly, I did not run well on marathon day.  5 runs a week is enough for me, it allow me to run 40+ miles, do all my key sessions, a recovery run, and I still have time for a spinning class or 2 and my favourite Tuesday morning yoga class.  I’m definitely not planning any 70 mile weeks any time soon!

Running just seems to be a bit easier at the moment, I’ve been doing my track sessions at an even, or progressive, pace without vomiting on the 400m line and I’ll even admit to possibly, maybe, enjoying it this week which I don’t think has ever happened before!

Tempo sessions have also been going well (ie I finish them without feeling like I’m going to drop dead) and I’m so happy to be running with Ruth again.  Ruth and I used to run together a lot when we were training for the Rome Marathon, then she got quicker and I got slower and she became a little dot on the horizon.  Ruth is still speedier than me but I enjoy chasing her, and the other speedy girls Jenna and Kristy, round a cold dark Battersea Park.  Throw in some long runs at a pace I’m happy with and I’m actually feeling quite positive.

All I have to do now is keep it up for the next 13 weeks without getting injured, errrrm, should be fine if I go to yoga every week right…??

I hope your Spring marathon training is going well too!